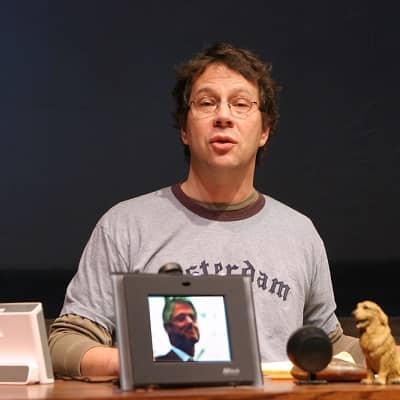 Rick Cleveland is currently possibly single. He has not disclosed his relationship and affairs. He likes to keep his personal life secret.

Who is Rick Cleveland?

Rick Cleveland is an American television monologist, playwright, and writer. He is best known for writing the HBO original series Six Feet Under and NBC‘s The West Wing.

This playwright was born on April 2, 1968, in  Illinois, United States. There is no more information about his mother.

His father was a Korean war veteran who passed away from complications due to liver failure. He graduated from the Playwrights Workshop at the University of Iowa.

Cleveland joined the crew of The West Wing as a Co-producer for the first season from the second episode Post Hoc, Ergo Propter Hoc onwards. He co-wrote the episode In Excelsis Deo with the series creator Aaron Sorkin.

The episode took place at Christmas time and followed White House Communications Director Toby Ziegler as he tried to find out more about a homeless war veteran who died wearing a coat that once belonged to Ziegler. He also co-wrote the story for “Enemies” with Executive Story Editor Lawrence O’Donnell Jr. and Consultant Patrick H. Caddell.

In 2000, Cleveland and The West Wing creator ‘Aaron Sorkin’ won the Emmy Award for Best Writing for a Drama Series for their episode ‘In Excelsis Deo’. The episode which originally aired during the 1999–2000 season.

He wrote two further episodes ‘Driving Mr. Mossback’ and ‘The Liar and the Whore’. He remained a supervising producer for the third season in 2003. He scripted ‘Nobody Sleeps’ and ‘Death Works Overtime’.

In 2004, he was promoted to co-executive producer for the fourth season, and wrote the other two episodes ‘In Case of Rapture’ and ‘Grinding the Corn’.

Afterward, Rick was promoted again to executive producer for the fifth and final season in 2005 and wrote his last episode, ‘Eat a Peach’. He wrote eight episodes for this series.

Cleveland, Brian Koppelman, David Levien, and Matthew Chapman co-wrote the 2003 film Runaway Jury based on the book by John Grisham. Rick served as a writer for the AMC television drama Mad Men for the show’s second season in 2008. He was nominated for the Writers Guild of America Award for Best Dramatic Series in the 2009 ceremony for his work on the second season.

In 2011, his play The Rail Splitter premiered at Carthage College. Later, the plays traveled to the Kennedy Center American College Theatre Festival (Region 3) in 2012.

Cleveland currently serves as a writer, and consulting producer on the Showtime series, Nurse Jackie.

Rick has won three Writers Guild of America Award for Television. He is also a winner of Primetime Emmy Awards.

Rick’s primary income source is Playwright. His salary is still under review, we will update you as soon as we get the information.

Meanwhile, according to some sources, he has an estimated net worth of $5 million as of 2020.

There are no rumors and scandals of this writer as he likes to keep his personal life private and secret far away from mainstream media. He is doing pretty well in his acting career.

Rick Cleveland has a decent height equivalent to his weight. Likely, he has brown hair and light brown eyes.