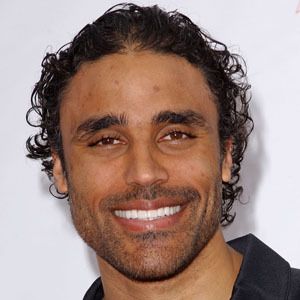 Everything I've always done has been for the sole purpose of increasing my lovemaking output. A lot of guys won't admit that, but I do. I just want to make love

I've traveled around the world and made love with many satisfied women. So I decided to share my story

Let me read you some of my poetry. My poetry just takes me to another level.

Rick Fox was married to actress/singer Vanessa Williams. After eloping in summer 1999 in the Caribbean, they had another ceremony in September 1999 in NYC. They have a daughter, Sasha, who was born in May 2000.

After The National Enquirer published pictures of Fox kissing and hugging another woman in mid-2004, Fox’s representative announced that the couple had been “headed toward divorce”.

A few months later in August 2004, Fox filed for divorce from Williams. Fox and Williams’ split, however, was amicable enough for the two of them to work onscreen together several years later on the television show Ugly Betty. Fox and actress Eliza Dushku dated from October 2009 to June 2014.

Who is Rick Fox?

Rick Fox is a Canadian actor, businessman, retired basketball player, as well as an E-Sports franchise owner. He used to play in the National Basketball Association (NBA) for the Boston Celtics and Los Angeles Lakers.

Rick Fox was born as Ulrich Alexander Fox in Toronto, on July 24, 1969, to Dianne Gerace, an Olympic high jumper and women’s pentathlete, and Ulrich Fox.

While his father is Bahamian, his mother is of Italian and Scottish descent.

His family moved to the Bahamas when he was of a young age. He has a sister named Jeanene Fox and a brother called Aaron Fox.

Rick’s nationality is Canadian and ethnicity is Bahamian, Scottish, and Italian.

Fox studied at Kingsway Academy, where he was one of the members of the high school’s basketball team, the “Saints.” He also played high school basketball in Indiana.

Then, Fox starred collegiately at the University of North Carolina where his highlights incorporated the leading of Tar Heels to the 1991 NCAA Final Four.

Rick Fox began his professional basketball career after being selected by the Boston Celtics in the first round as the 24th pick overall during the 1991 NBA draft. As a member of the Celtics, Fox became the first rookie starter on opening night since Larry Bird in 1979 and made the 1992 NBA All-Rookie Second Team after averaging 8 points per game.

In 1997, the Celtics released him, and he signed with the Los Angeles Lakers.  Following the 2003–04 season, Fox was traded back to the Celtics but chose to retire instead.

Fox also played internationally for Canada twice, once in the 1990 and the other during the 1994 FIBA World Championships.

While attending UNC, he completed a bachelor’s degree in Radio, Television, and Motion Pictures. In 1994, Fox appeared in the film Blue Chips in the role of a member of the Texas Western basketball team.

Two years later, he played the role of Terry Hastings in the film Eddie, a slumping basketball player who receives help from an “Eddie”. Fox then had a role as the ladies man Chick Deagan in the 1998 film He Got Game. It was in 1997, though, that Fox received the biggest role of his early acting career. He played the prison inmate named Jackson Vahue on the HBO prison drama Oz.

Fox has also appeared in ‘To Your Health‘ episodes. He was a supporting actor in the 1999 film Resurrection, 1-800-Missing, Crime Wave/Odd Ball episode of Nickelodeon’s animated series The Fairly OddParents, Street Time. Likewise, Fox also appeared in the movie Holes as the supporting character Clyde ‘Sweetfeet’ Livingston, a baseball player.

In 2005, Fox guest-starred as Stephen Melbourne in Kevin Hill. Likewise, he also appeared in Love, Inc that same year. Fox played in Mini’s First Time and appeared in One Tree Hill in 2006. In 2007 he played in Ugly Betty. The following year Fox signed on with the show Dirt.

In 2008 and 2009, he had a recurring role The Game. In 2009, Fox played in  Party Down and Head Case. Fox briefly guest-starred on Dollhouse and took on a recurring role on a remake of Melrose Place. In 2011, he, then, played in The Big Bang Theory episode The Love Car Displacement.

In 2015, Fox played in Sin City Saints, Sharknado 3: Oh Hell No!, and iZombie. He also appeared in Shameless, in 2016 as well as played on various reality TV shows. Fox also is a businessman and E-Sports franchise owner.

His salary figure is unknown, but his net worth amounts to around $25 million.

There had been rumors that Khloe Kardashian and Fox were dating, which later turned out to be false. Other than that there are no other popularly known rumors or controversies regarding Fox.