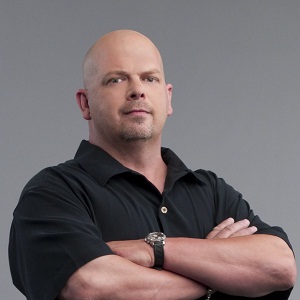 Everyone likes to learn history. They just don't like to hear it from a professor looking at notes. They like to hear it like it's from their uncle, and that's how I explain history

My dad was in the Navy

he was in Vietnam. My mom was trying to sell real estate on the side. We didn't have a lot of money

My father was an amazing guy. Twenty years in the Navy, great father.

At the age of 17, Harrison’s girlfriend Kim became pregnant and decided to marry her and later on she gave birth to their first child Corey on April 27, 1983.

Afterward, she gave birth to another child, Adam, they were separated soon after Adam’s death. Harrison married his second wife, Tracy, taking the responsibility of his sons and welcomed another child, Jake.

They again got separated due to misunderstanding and he again married Deanna Burditt, on Jul 21, 2013. These days he is living happily with her.

Who is Rick Harrison?

Rick Harrison is an American businessman, actor, and reality television personality who is mainly popular as the co-owner of the World Famous Gold & Silver Pawn Shop. He also co-owns the pawn shop with his father which they had opened in 1989.

Rick was born on March 22, 1965, Lexington, North Carolina, United States. His nationality is American and ethnicity is North American.

He spent his early life and childhood in Davidson, North Carolina, United States. He was raised up by his parents along with his younger brother of Sherry Joanne Harrison (died at age 6), and Joseph Kent Harrison and the older brother of Christopher K. Harrison.

His father was transferred to San Diego, California and all the family relocated with him. At the age of eight, Harrison suffered from epileptic seizures, limiting him only on a bed and fall in love with books.

He was quite interested in reading particularly physics and history. Talking about his education background, he attended Taft Middle School and dropped out during tenth grade.

Business minded Harrison started his career when he opened the Gold & Silver Pawn Shop with his father. He was also known as pawnbroker having special sports items in Las Vegas in the year 2006.

His business also served gamblers who often came in to pawn something. He was also awarded as Pawnbroker of the Year for his contributions in advising the public about the pawn industry. He was featured in the show Insomniac with Dave Attell about a pawn shop in the year 2003.

Harrison was approached in a reality show which was named as Pawn Stars later. This show became the highest rated program on the History Channel in January 2011. He also became a spokesperson for the Micro Touch One Razor.

Harrison also became an author and penned a book. He published a biography called License to Pawn and reached #22 on The New York Times Best Seller list on June 26, 2011.

Rick Harrison: Salary and Net Worth

He has estimated net worth of $8 million and his salary is $300,000 per season from Pawn Stars.

Once there was controversy regarding Harrison’s new wife’s ex-husband,  Richard Burditt,  who was arrested in September 2009, posted $18,024 in bail. Harrison said that the whole situation extremely distressed him and his wife.


Rick has a height of 5 feet 11.5 inches. He has brown hair color and her eye color is blue. His weight and shoe size is unknown.