Rick Hoffman is an American actor. He is best known for playing Louis Litt in a series of Suits. He is possibly single. 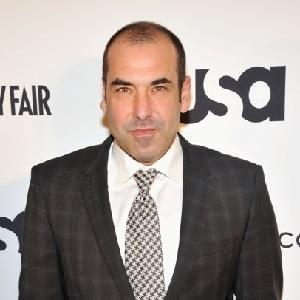 There's so many more failures than successes for actors. It's like a phobia, fear of cancellation

I am not a cat lover. I am a dog lover - but I'm only a lover of hypoallergenic dogs

My parents are always a great litmus test. Based on the amount of shrieks my mother gives when we're out in public, her constant shock when somebody comes up and says something nice.

What is the relationship of Rick Hoffman?

Rick Hoffman has kept his personal life low profile. There is no information about his previous and present relationships. He has never revealed anything about his relationship status and love affairs.

There is no record of his partner to date.

Who is Rick Hoffman?

Rick Hoffman is a famous American actor. He is best known as Patrick Van Dorn in ABC’s comedy series Jake in Progress (2005-2006). Rick is also famous as Louis Litt in the comedy-drama series Suits.

He is one of the most talented actors in the United States.

Rick Hoffman was born in the year on June 12. He was born Rick Edward Hoffman in New York City, USA.

Talking about Rick’s family, he is the son of Jewish parents, Gail Hoffman and Charlie Hoffman. He has a younger brother named, Jeff. He is American by nationality and his ethnicity is Ashkenazi Jewish.

As regards Rick, he grew up in Roslyn Heights in New York. Furthermore, there are no details about her childhood.

As regards his education, he completed his school graduation from The Wheatley School in Old Westbury, New York. Later, he attended the University of Arizona.

He was interested in acting since his early childhood. After graduation, he moved to Los Angeles in order to pursue his career in acting.

Rick Hoffman began his acting career in 1997, playing the role of a security guard in Conspiracy Theory. In his early acting days, he played several small roles in different movies.

He got his first big break in 2000 as Freddie Sacker on Darren Star’s Wall Street series The $treet. In 2001, he appeared as Terry Loomis in the TV film Philly.

That same year, he completed 10 episodes as Jerry Best in The Bernie Mac Show. His performance as Patrick Van Dorn in the movie Jake in Progress (2005) was highly appreciated by the audience.

He appeared as an American Businessman in the 2005 movie Hostel and its 2007 sequel Hostel: Part II.

Hoffman’s role as Lance Addison in the TV series Commander in Chief (2006) was also loved by the fans. He also appeared as Michael Raykirk in an episode of CSI: Crime Scene Investigation in 2007.

He did appear in 9 episodes of Samantha Who? (2007-2009), in which he played Chase Chapman. Since then, he has appeared in several TV films and big-screen movies.

He is the lead character of Suits (2011–present) in which he appears as Louis Litt. He has earned popularity as well as wealth in his career.

Rick has an accumulated net worth of $1 million. Besides these, there are no details on his salary.

He is often rumored to be gay as no one has ever heard of him being in a relationship with girls. He hasn’t revealed his relationship status and sexual preference until now.

Rick has been very clear and straight in his career. He has never been linked with any controversies till now.

Rick Hoffman has a height of 5 Feet and 10 Inches. He has dark brown hair and dark brown eye. His body weighs 78kg.

He is also active on Facebook where he has more than 20.1k followers.