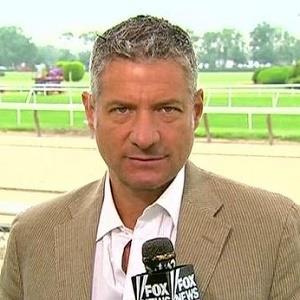 Gutsy reporter Rick is engaged to his girlfriend Kelly Dodd, which they announced through Instagram! They have picked a date Oct. 10, 2020, for their wedding.

Previously, he married a poker player, Beth Shak. The couple got into a married relationship on 9 June 2016 in Las Vegas. However, they divorced after nine months.

He was also married to an on-air reporter for WSVN-TV and WFLD-TV Penny Daniels. Although there isn’t any record of them to be married, they were blessed with two daughters, Veronica and Shoshana.

Veronica, born in 1991 become an activist, advocate and social worker whereas Shoshana was born in 1996, became a vegan focusing on music, Philosophy and women’s studies in college. Their married life came to separation due to some reasons.

Who is Rick Leventhal?

He is a senior correspondent for Fox News Channel and is famous for the news that he covers risking his life.

Rick Leventhal was born as Richard Gary Leventhalin Silver Spring, Maryland on 24 January 1960, to Dr. Allan Leventhal and Carol Leventhal. He is of North American ethnicity and has an American nationality.

His father is a retired psychologist and the director of Greenbelt Cares. He has one elder brother Scott and a younger sister Leigh.

For his schooling, he went to Montgomery Blair High School and did his graduation with a B.A in broadcast journalism from American University in Washington, D.C.

Rick Leventhal is a gutsy reporter who has been into war zones just to cover the news. He covered during the time of war in Iraq, Afghanistan, Israel, Albania, Macedonia, Kosovo, and Libya to cover news embedding with Marines.

He was the first journalist to report the scene of terrorist attacks on the World Trade Center on 11 September 2001 and the first to go live before the towers fell to the ground. He joined Fox News Channel in March 1997.

Recently he has covered the live flooding of Louisiana, the killing of Osama Bin Laden as well as the 10-year commemoration of 9/11. He has also dispatched to numerous natural disasters reporting for the channel. He has also gone to Haiti for the cover of news regarding the devastating earthquake in 2010 and also to Vatican City to cover the death and funeral of Pope John Paul II.

Rick Leventhal has an estimated net worth of around $1 million.

He has a good height of 5 feet 10 inches. He has salt and pepper hair color and her eye color is light brown.