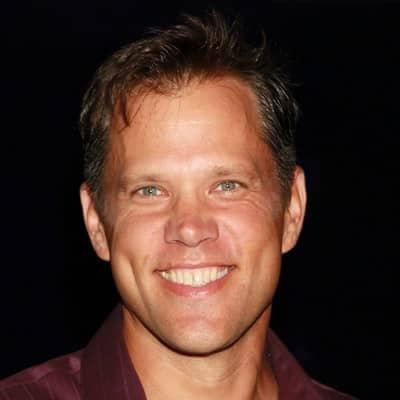 Rick Peters is a married man a father of two children. He gets married to a screenwriter Dawn Jackman Peters.

Together the couple has a daughter named Crystal Peters and a son named Jason Peters. Furthermore, he remains keeps secretive about his private life.

Who is Rick Peters?

Rick Peters is recognized as an American renowned actor. He rose to fame after his prominences role as “Australian Bobby Manning” in Sue Thomas: F.B.Eye.

Rick was born On June 1, 1967, in Detroit, Michigan, the U.S. At present, he is 53 years old and his Zodiac sign is Gemini. Talking about her nationality, he holds a Canadian citizen and belongs to Caucasian ethnicity.

Rick hasn’t yet disclosed his parent’s and sibling’s details in the media. Nevertheless, it is known that he is the fifth child of his parents and has three brothers and two sisters.

Due to his father’s profession, Rick moved to England in 1968 with his family where they lived for over 5 years then the family returned to Michigan. In 1977, his father transfer to Australia and lived there for five years afterward the family moved back to the states.

Moreover, his academics details are under the curtains at the moment.

Rick made his television debut in the year 1993 through the regular series, Against the Grain where he portrayed the role of Bobby Taylor. A year after, he appeared as a guest in Full House: A Date with Fate.

That year, he also made his big-screen debut in the role of Rick in Night of the Demons 2. Afterward, he was cast in the 1997 science fiction black comedy slasher film, Leprechaun 4: In Space as Private ‘Mooch’. In the same year, he also appeared in the lead role in the movie Elvis Meets Nixon.

Last time, Peters was cast in the role of Warden Bart Shulman in an episode of “Devil’s Backbone” in the 2016 Criminal Minds. Furthermore, some of his notable film and television series are,

Until now, Peters has managed to maintain a clean image in the public. He hasn’t been part of any sorts of rumors and disputes that create a headline in the media.

Peters might have accumulated a fair amount of fortune throughout his successful career as an actor. But he hasn’t yet revealed his actual figure of net worth, salary, and other assets in the media.

The actor stands at the height of 6 feet 3 inches tall. He has an athletic body type and has a brown hair color with hazel grey pair eyes. Moreover, there is no information available regarding his other body measurement.