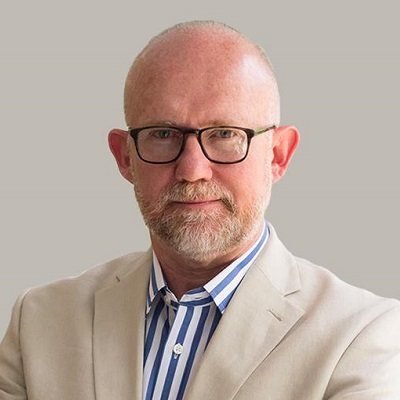 When authority is total, so too is the madness of the man who declares it, and the potential for abuse of power.

I think Trump is so dangerous because the people that he appeals to the most have this sense of despair and oppression that has become a central defining characteristic of their lives. And they feel like only he is their avatar

only he will fight for them

only he will keep the wolf from the proverbial door.

Rick Wilson is a married man. His wife’s name is Molly Wilson.

The couple is blessed with two children. He has a special corner for pets like dogs and cats.

Currently, he lives in Tallahassee, Florida with his wife and dogs plus a nameless cat.

Who is Rick Wilson?

Rick Wilson is a former GOP Political strategist plus Media consultant. Wilson is renowned for producing political commercials during elections.

He is also a columnist. Last, in 2020, he published his second book, Running Against the Devil.

Rick Wilson was born on the 21st of November 1963 in Tampa, Florida, US. His birth name is Frederick George Wilson and has British-Scottish-Irish ancestry.

Rick has not revealed any information regarding his father, mother, and siblings.

Political Strategist as a career

– He started his career as a political strategist in 1988. At the time, he supported Republican Connie Mack for the position of Senate of Florida. In the election, Mack became victorious with a 50.4% vote.

– Later, he joined the George H. W. Bush campaign. At the time, Bush was a nominee for the position of Florida field director.

– He was appointed as a presidential appointee for the Department of Defense.

– In 1994, he expanded his career as a media consultant. At the time, he joined a Florida media firm.

– In 1997, with the firm, he created the ads for Rudolph Giuliani for New York City mayoral election. The ads won the Pollie Awards.

– As a columnist, Rick Wilson has contributed columns for the column that includes The Daily Beast, Politico, The Federalist, and Ricochet.

– After Donald Trump was elected as president, he presented himself as a critic. In 2018, he published his very first book, Everything Trump Touches Dies.

– Two years later he published the book, Running Against the Devil.

During the discussion on the matter of the heated argument that Secretary of State, Mike Pompeo had with an NPR reporter.

At the time, Rick Wilson said that Trump couldn’t find Ukraine on the map and the physical picture of the crane next to it. Hearing out that CNN reporter Don Leman cried out laughing.

For that, Don had been twitted by Trump as the dumbest man on television with a terrible rating. Later, he was backlashed by Trump’s daughter and followers.

Rick has brown eyes and a clean shaved head. He is 5 feet and 8 inches tall and has a decent weight.

He is active on Twitter with the handle, @TheRickWilson.

On the account, he has 1.2 million followers and follows the personalities like Stefan Fatsis, Jillian Barberie, and Andy Durehren.