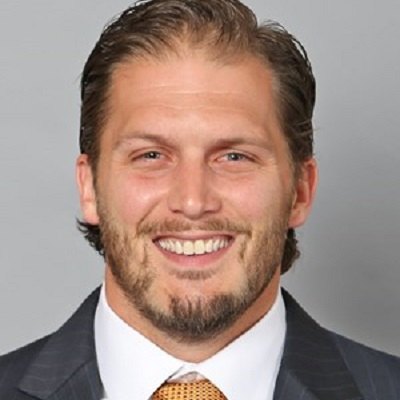 What is the relationship of Ricky Brown?

Ricky Brown is married to Brynne Brown. Till date, he has shared any details regarding his wedding date and dating, history.

Together, the couple is blessed with two children including a daughter Brixton and son Nicholas.

Who is Ricky Brown?

Ricky Brown is a former football linebacker and now a coach. He is renowned for his defensive playing style as a linebacker.

Currently, he is the linebacker coach of the Lafayette College in Easton, Pennsylvania.

Ricky Brown was born on the 27th of December 1983 in Cincinnati, Ohio. His birth name is Richard Gerald Brown. He is of Mixed (British, Scottish, and Irish) ethnicity.

To date, he has not shared any details on his family background regarding his mother, father, and siblings.

Talking about his educational background, he completed his High School education at Cincinnati Elder High School. During High School, he started playing football. Also, he was actively involved in track. In 2002, he happens to be the winner of the 100m, 200m, and 400m tracks in the Greater Catholic League track.

Later, in 2002, he attended Boston College for his further study. In 2006, he graduated from the University with Honors in Finance.

During his university days, he used to play as the linebacker of the college team. In his freshman year, he became a member of The Sporting News’ Big East All-Rookie Team.

Moving forward, in his junior year, he became a member of the ACC All-Academic Team. The year, he was awarded Scanlan Award by his college.

After graduating from college, Ricky Brown started his professional career as an undrafted free agent. However, he made a very good impression during training camp with the Oakland Raiders. Due to this reason, he made it to the team’s practice squad.

Later, he earned his position on the active roster in the 5th week during the match with theSan Francisco 49ers. The year, he played 13 practice games. The following year, he made played his debut in NFL against the team, Jacksonville Jaguars. He played a total of 16 games in the year.

Later, on the 20th of August 2011, he signed a contract with the New England Patriots. The clauses of the contract were never revealed. On the 2nd of September of the year, he got released from the team.

Once more, he re-signed Oakland Raiders for the second time. Within one month, he was released from the Raiders once more.

After that, on the 25th of July 2012, the Baltimore Ravens signed him as a player. In the team, he earned his first championship title.

In 2014, he expanded his career as a coach for the University of Southern California’s football team. For the team, he worked in quality control. In 2016, he joined Boston College as the director of Football Initiatives.

The following year, he was promoted to be the SAM’s linebackers coach. In 2020, he became the linebacker coach of the Lafayette College.

Ricky Brown has blue eyes with brunette hair. He stands at a height of 6 feet 2 inches and weighs around 109 kg.

Till the date, he has managed to maintain a distance from any sort of controversy and rumors that created a buzz in the media. Also, he has not been involved in any type of rumors.

On the social media site, he is following the personalities like Augie Hoffmann, Beth Mowins, and Jon Gordon.

You may also read the bio of Ben Foster, Bridget Moynahan, and Dario Melendez.