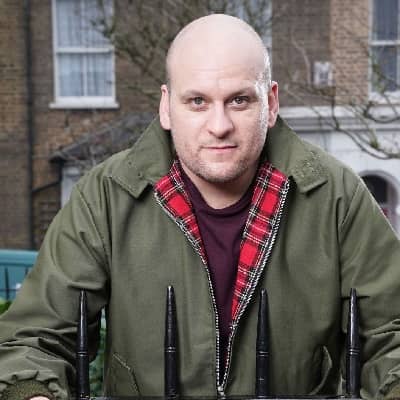 What is the relationship of Ricky Champ?

Ricky Champ has been married to his wife Samantha Gilbert on August 12, 2016. Their relationship might have started many years back. However, how and when they met are kept private.

The Couplet has been blessed with two children namely Beatrix and River Leo Champ. Currently, it is going pretty well with Samantha and there is no sign of any divorce or separation.

Who is Ricky Champ?

Ricky Champ is an English TV and film actor best known as Stuart Highway in the BBC soap opera ‘EastEnders’. Furthermore, he has appeared in several hit films and television series.

Champ has not given details about his parents. Likewise, he also hasn’t talked about his siblings if any. His childhood life is still unclear.

He is of British nationality and belongs to the Cancer zodiac sign.

Before getting his training from Guildhall School of Music and Drama he was enrolled at South Essex College.

Ricky Champ is a genius who started his career at the age of 25 in the movies and TV series. His first acting role came in 2005 as Geoff Hardcastle in TV series called Family Affairs and was later seen in varieties of roles in Driving Lessons, The Bill, Hotel Very Welcome, and Doc Martin. However, he was well known as Paul Parker in the BBC Three sitcom Him & Her from 2010 to 2013.

Till now, he has featured in many films and tv series, the most notable include Casualty, Youngers, The World’s End, Peter and Wendy, Game of Thrones, Lost in London, Tracey Ullman’s Show, and Grandpa’s Great Escape among the others. His latest role as Stuart Highway from EastEnders is a must-watch!!

Champ has succeded to earn a hefty amount of money from his career as an actor. However, he has not divulged the information about his fortune.

Ricky is a respected actor whose work is loved and appreciated by the majority of people. Therefore, he has been away from the false rumors and controversies.

Champ stands 6 feet and 1 inch tall and weighs moderate. It seems he is concerned about his routine diet. Likewise, he has a bald head and dark brown eyes.