Ricky Garcia was a member of the band Forever in Your Mind. He was seen in Best Friends Whenever and Bigger Fatter Liar. 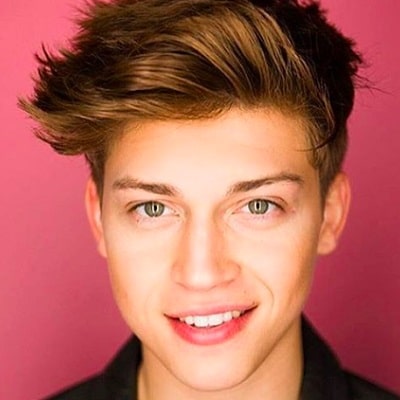 Ricky Garcia is currently living his single life. Previously, he was in a relationship with singer and songwriter Destiny Rogers. But he and his girlfriend soon broke up as he was also interested in other girls at that time.

After that, he dated dancer, actor, and model Chloe Lukasiak. They began dating after meeting for the second time at Digifest, having met the first time at the 2015 Radio Disney Music Awards.

However, this relationship too ended after 10 months before reaching their first anniversary. The reason behind their separation was because of their hectic work schedules.

Then, he dated Beatrice Vendramin in 2016 and their relationship was not also so strong and they soon broke up.

Who is Ricky Garcia?

Ricky Garcia is an American actor and singer. He is best known as a member of boy-band Forever in Your Mind and star of Disney’s Sci-Fi sitcom Best Friends Whenever.

He was born on January 22, 1999, in Roosevelt Roads Naval Station, Puerto Rico, where his father, Tammy served in the military base of the US Navy.

He has two older siblings, both brothers Emery Kelly and Liam Attridge. His family relocated to Texas, United States, and later moved to Los Angeles.

Ricky Garcia started his career at a young age as a model. He rose to fame when he auditioned for season 3 of the X-Factor. Although he was eliminated, judge Simon Cowell put him together with two other eliminated contestants Emery Kelly and Jon Klaasen. After Jon Klaasen left the band, Liam Attridge replaced him.

The trio formed a boy band named Forever in Your Mind and began to release their music worldwide.

The band released their first single She Lights the World in 2013 which was followed by hit singles Naughty List (2014), Sweet Little Something (2015), Wrapped Up for Christmas (2015). Finally, in July 2016 the band released its debut EP FIYM and in January 2018 released its second EP Euphoric.

He is also an actor. He appeared as Naldo in Disney Channel comedy Best Friends Whenever. The show’s theme song Whenever is from Forever in Your Mind’s album. However, the series ended in December 2016 after 2 seasons and 30 episodes.

He was also cast in the Disney’s Forever Boys, which also starred band mates Emery Kelly and Liam Attridge. Unfortunately, the show was not picked up.

Furthermore, he made guest appearances as Asher Garcia in Girl Meets World, as Jake in It’s Always Sunny in Philadelphia, as Matt in Intervention, and in Netflix series Alexa & Katie, in which Kelly plays Lucas Mendoza.

He was nominated for the Teen Choice Award in the category Choice Movie Actor: Comedy for ‘Big Fat Liar 2’ in 2017.

He sued ex-manager Joby Harte of sexual assault in September 2019. According to Garcia, the assault began when he was 12 years old, continued for years, and passed him around as a “sexual plaything” to other industry pedophiles.

The suit added that Garcia did not tell anyone about the abuse until March 2018 because he was afraid to lose his career. He then first told Harte’s former assistant, who told Garcia’s mother.

Ricky Garcia has a height of 5 ft. 9 inches and has blue eyes and blonde hair. Other information about his weight, shoe size, dress size, etc.a re not available.

To know more about Melody Holt, Rita Hayworth, and Erin Lim, please click on the link.