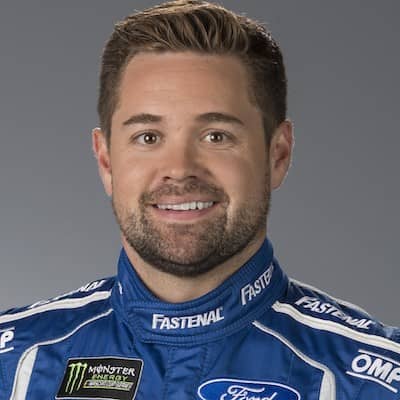 What is the relationship of Ricky Stenhouse Jr.?

Ricky Stenhouse Jr. at present is in a romantic relationship. He is dating a girl named Brittany Long.

This lovely couple started their affair in 2018 and in the same year, Ricky took her girlfriend to the Bahamas for her 30th birthday.

As per the reports, they will soon welcome their first child together.

Prior to her, he was romancing with a racer Danica Patrick. They started to date in 2012 but broke up after 05 years in 2017.

Who is Ricky Stenhouse Jr.?

Ricky Stenhouse Jr. is an American race car driver. He is at present with a team named Chevrolet Motorsport.

Further, he was seen competing on American Ninja Warrior in 2016.

He has Caucasian ancestry and has a twin sister named Hayley Stenhouse.

As per his academics, he attended Central DeSoto School.

Ricky Stenhouse Jr. from an age of six only was interested in racing and used to participate in cart racing. Till now, his career is quite amazing as he competed in several series.

In NASCAR Cup Series, his best finish was in 2017 when he came in 13th position. His debut NASCAR race took place in 2011 at Coca-Cola 600 event. Recently, in 2021, he was seen racing for the JTG Daugherty Racing team.

Further, Ricky was also involved in NASCAR Xfinity Series and his last race was in 2016, at the Ticket Galaxy 200 event. In this series, his first win in the year 2011 at John Deere Dealers 250 event.

This fearless racer was named Rookie of the Year in 2010 and 2013 by NASCAR Nationwide Series and NASCAR Sprint Cup Series respectively.

what is Ricky Stenhouse Jr.’s net worth?

As per the reports of 2022, his total net worth is estimated at $2o million. Further, the salary he receives is under the rug.

This champion racer has stayed away from any desperate scandals and rumors.

What are the body measurements of Ricky Stenhouse Jr.?

Ricky Stenhouse Jr. has brown eyes with light brown hair. He stands at a height of 5 feet 10 inches and weighs average.

Bachelor’s Serena Pitt and Joe Amabile Are Married in a Courthouse Ceremony!