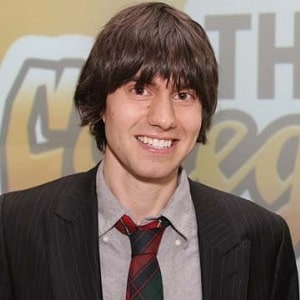 If you have a great idea that can translate elsewhere, then that's where the scalability comes in - and that's where you can actually start to make real money.

Viral videos aren't just about being funny. They're about identity creation.

What is the relationship of Ricky Van Veen?

Previously, he was married to Allison Williams on September 19, 2015. The marriage event took place at Brush Creek Ranch in Saratoga, Wyoming and their close friends and family accompanied the ceremony with some notable celebrities like Katy Perry, Zosia Mamet, Lena Dunham, and John Mayer.

This duo got engaged in February 2014. Allison is the daughter of NBC News anchor Brian Williams. The couple has not welcomed any child yet.

However, the couple divorced in 2019 and the decision was mutual.

Who is Ricky Van Veen?

Ricky Van Veen is an American entrepreneur. He is currently Head of Global Creative Strategy at Facebook. He is also the co-founder of College Humor which is a comedy brand/website.

His father’s name is Richard and his mother’s name is Helen Van Veen. Ricky holds American citizenship and his ethnicity is Caucasian.

In which university did Ricky Van Veen attend?

Talking about his education, he attended Wake Forest University.

Ricky Van Veen is the CEO of National, a television company born out of College Humor. He created the site as a student while he was at Wake Forest. He was earning from $10 million to $15 million per year before the partners sold a controlling stake to IAC/InterActiveCorp.

Ricky also made his appearance in episode six of Jake Hurwitz and Amir Blumenfeld’s podcast, ‘If I Were You’, and also appeared in several College Humor video series like ‘Jake and Amir’, and ‘Hardly Working’, and the former MTV program ‘The CollegeHumor Show.

It was announced in July 2009 that he was selected as the CEO of the new production company, National, which would be producing material for the traditional media of television. He would be mentored by Barry Diller (chairman and senior executive of IAC/InterActiveCorp).

Regarding awards and nominations, he got a nomination for Webby Award for Humor in 2017.

This entrepreneur has an estimated net worth of around $25 million which he earned from his professional career.

The 40 years old entrepreneur has not been involved in any type of rumors and controversies in his career.

How tall is Ricky Van Veen?

Ricky Van Veen has a height of 5 ft. 8 inches and he weighs 70 kg. Ricky has light red hair and light brown eyes.

To know more about Marylouise Burke, Kimberly Foster, and Erin Gray, please click on the link.

Does Brian Williams have a daughter?

Adam Mosseri
Tags : American entrepreneur CollegeHumor If I Were You