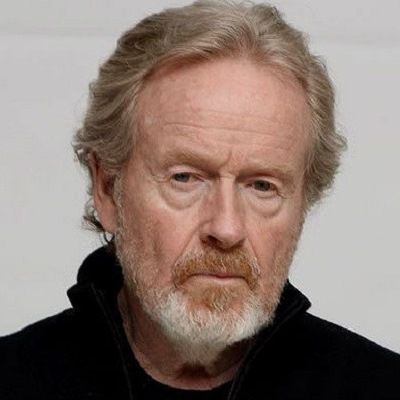 I knew exactly what to do on Alien, it was funny

Do what you haven't done is the key, I think

I was always amazed about how much I could finally squeeze into a thirty second commercial.

What is the relationship of Ridley Scott?

He then started dating Sandy Watson and got married to her on May 24, 1979.

This marriage too ended in a divorce 10 years later. The couple had a child namely, Jordan Scott.

He is presently in a married relationship with Giannina Facio. They exchanged vows in June 2015.

His third wife has featured in most of Ridley’s films.

Who is Ridley Scott?

Ridley Scott is an English film producer and director, regarded as one of the biggest names in Hollywood.

Ridley Scott was born in South Shields, Northumberland, England, the United Kingdom on November 30, 1937, and he is currently 84 years old.

Talking about Ridley’s education history, Ridley studied at the ‘Grangefield Grammar School. Then, Ridley enrolled at the ‘Royal College of Art’.

Talking about his profession, Ridley’s first attempt at the direction was for his short film ‘Boy and Bicycle,’ which starred his younger brother, Tony, and his father. The film was proof of his unique way of looking at stories and the world in general.

Ridley continued with his studies, eventually graduating in 1963. He eventually bagged a job as a trainee set designer for ‘BBC.’ He worked on the popular science-fiction series ‘Out of the Unknown’ and the police-procedural series Z-Cars.’

Scott started his own production company with his younger brother, Tony. They soon started producing TV commercials and gained considerable recognition. Their narrative style resonated well with the general public. Ridley was on his way to start the production of his debut feature film.

In the year 1977, Ridley Scott stirred the international film festival circuit with his debut feature film, ‘The Duellists.’ It was a historical war film. This paved Ridley’s way to mainstream Hollywood. Ridley accepted the job of directing ‘Aliens’ in 1979. Ridley’s third film was ‘Blade Runner,’ a 1982 science-fiction saga.

Scott soon came to be known as an enigmatic Hollywood director and continued directing remarkable films such as the 1985 fantasy film ‘Legend,’ starring Tom Cruise in the lead role. Another film by the director was ‘Black Rain,’ which starred Michael Douglas as a cop on a mission to Japan. Both films were critically and commercially appreciated.

The 1991 road film ‘Thelma & Louise became a roaring success at the box office. By then, it seemed that Ridley would surpass his idol Stanley Kubrick, in terms of fame. His next film, ‘1492: Conquest of Paradise,’ was a disaster, both critically and commercially. In the meantime, he produced two films, ‘Monkey Trouble’ and ‘Browning Version.’

He returned to the director’s chair with the 1996 film ‘White Squall,’ which was another failure. His next venture, ‘G.I. Jane,’ too was a disaster. Ridley took another break from directing and concentrated on his career as a producer, with the series ‘The Hunger,’ loosely based on the 1983 film directed by his younger brother, Tony Scott.

In 2000, Ridley returned to direction with the Russell Crowe-starred Gladiator,’ a Roman epic. The film was a roaring success worldwide, and apart from turning Russell Crowe into an international star. In the year 2001, Ridley returned as a director, for the sequel of the 1991 blockbuster ‘Silence of the Lambs,’ titled ‘Hannibal.’ Although the film received a mega opening.

The 2007 film ‘American Gangster’ was based on the real-life tale of Frank Lucas, a popular drug kingpin. His next two ventures, ‘Body of Lies and ‘Robin Hood,’ were moderate box-office successes. In 2009, news reports confirmed that Ridley was planning a prequel to ‘Alien,’ titled ‘Prometheus.’

After a three-year-long production phase, the film, starring Michael Fassbender and Charlize Theron, was released in 2012. It was a critical success and became one of the highest-grossing films of the year.

Impressed with Ridley’s directing prowess, famous author Cormac McCarthy asked Ridley to direct a film based on his screenplay. The film, titled ‘The Counselor,’ released immense critical and commercial acclaim. Ridley followed it up with ‘Exodus: Gods and Kings,’ starring Christian Bale.

It received an average critical response but was a major box-office draw. Ridley returned to his science-fiction roots with his 2015 film ‘The Martian,’ starring Matt Damon as a man stranded on Mars.

He won Outstanding Nonfiction Special for Gettysburg (2011), and Outstanding Made for Television Movie for The Gathering Storm (2002) at Primetime Emmy Awards. Then, he won the Short Film for Zero (2015) at Best of Show.

Likewise, he won the Hall of Shame for The Counselor (2013) at EDA Special Mention Award. Similarly, he won Digital Craft for The Martian VR Experience (2016) at Silver Lion Award.

He has an estimated net worth of around $400 million (as per 2022 data) and he has earned that sum of money from his professional career.

This talented producer plus director has earned fame and fortune in his career. He is living a lavish life.

He is a successful film producer. He is currently away from any rumors and controversies.

Ridley Scott has a height of 5 feet 8 inches. Additionally, he weighs is 79Kg. His hair color is grey and his eye color is hazel.