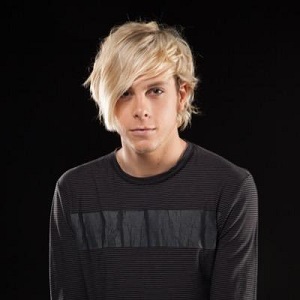 If you absolutely love it more than anything in the world, don't give up. You gotta keep working hard because it's a lot tougher than it looks

Ever since I was little I would always be singing and dancing. I learned dance moves from Michael Jackson and *Nsync. My brothers, Rydel, and I would always put on shows for family members in our basement and we charged everyone $1 to get in

I'm a brilliant filmographer. Is that a word?

Who is Riker Lynch?

Riker Lynch is an American singer-songwriter, musician, actor, and dancer. He fame as the bassist and one of the lead singers in the American pop rock family band R5 alongside his brothers Ross, Rocky and Ryland, sister Rydel and Ellington Ratliff. The band released the widely popular single Loud in 2013.

As a child, Riker and his sister Rydel took piano lessons and competed as partners in dance competitions. He began singing when he was three years old. His nationality is American but his ethnicity is mixed(German, Irish, English, and Danish).

Lynch began his career appearing in stage productions of Peter Pan and Annie Get Your Gun. He made his screen acting debut in the 2008 film Sunday School Musical. The following year, he competed in So You Think You Can Dance.

Riker was one of the Dalton Academy Warblers on Fox’s hit show Glee. He was introduced as Jeff in the season 2 episode “Special Education“.

Riker is the bassist and one of the lead vocalists in the band R5 with his family members Rocky, Rydel, and Ross also their best friend Ratliff.

In 2015, he participated in the 20th season of Dancing with the Stars, where he finished in second place. He will be seen as Greg Randle in the upcoming movie Colossal Youth and as Danny in Voyeur in 2017. He has a net worth of 2 million dollars.

He has a height of 6 feet with body weight 74 kg. He has light blonde hair color and his eye color is dark brown.