Who are the parents of Riley Curry?

Riley Curry is too young for getting romantically linked up with someone. However, here is a detail of her parent’s relationship.

Her father, Stephen Curry married her mother, Ayesha Alexander on July 30, 2011, after several years of dating.

Together, they welcomed a daughter named, Riley Curry in 2012 and Ryan Carson Curry in 2015.

The couple seems very happy with their children and there is no news of their separation up to date. 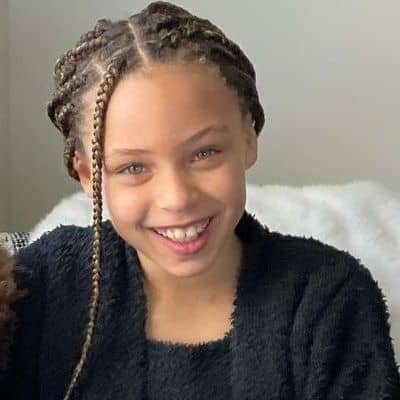 Who is Riley Curry?

Riley Curry is an American child model, who is best known to be the daughter of an American professional basketball player, Stephen Curry, and a Canadian-American actress, Ayesha Curry.

In May 2015, she appeared in some of her father’s post-game press conferences, after which she steal the attention of media and viewers.

Riley Curry was born in Charlotte, North Carolina, the United States on July 19, 2012. Curry is 10 years old as of 2022 and holds American nationality.

There is no further info about Curry’s educational life.

At the age of two, she was able to steal the attention of fans all over the world by making an entrance on the stage on May 19, 2015. Then, she was sitting on the lap of her father, Stephen Curry while he was getting interviewed by a journalist. During the interview, she cutely told her father to be with a charming giggle that stole the limelight from her father.

She then went on to wave to the journalist, speak on the microphone, and even ran over to the table. Subsequently, her video of trying to distract the press went viral on her social media pages. The video was able to garner over 3 million views.

Again, she jumped on the stage during her father’s press conference, on May 27, 2015. After that, she took over the microphone to sing parts of Big Sean Drake’s, ‘Blessings ahead of the journalists. Then, another video was again shared by the NBA on their official social media pages, and within weeks the video was able to garner more than 2.5 million views.

Within a few days of the video release, more than 500K people tweeted about her and using her appearances, memes and GIFs were created. Now, people are used to seeing her energetic appearance.

Riley Curry has a long way to earn her own money and start-up career.

Though Riley Curry is too young to be involved in rumors, she has been part of it after her videos of seizing the microphone from her father went viral. People were concerned and said her parents were too careless for letting her do so.

The celebrity kid Riley Curry is in her growing period so it is obvious her body measurements will change according to the time.

Moreover, She has brown eyes and hair of the same color as she has a fair complexion.

Even though, she is featured on her parent’s social media accounts.