Ice Hockey player and Athlete Riley Sheahan is engaged to his girlfriend. 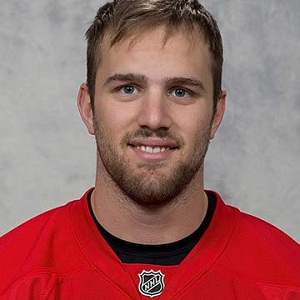 Sheahan is engaged. His fiance’s name is Kecia Morway. She is Personal Trainer, Nutrition Coach. The couple keeps uploading pictures of their vacations. However, there is not much information about this couple.

Who is Riley Sheahan?

He performed well enough at Canada’s 2011 National Junior Team prospect camp in the summer of 2010 and was asked to come back to the Selection Camp in December 2010.

Sheahan was born on December 7, 1991, in St. Catharines, Ontario, Canada. His nationality is Canadian and his ethnicity is North American.

His birth name is Riley Michael Sheahan. Her father’s name is Mike Sheahan and her mother’s name is Peggy Sheahan. He has a sister named Karli Sheahan. He played ice hockey from his school life, later going on to continue from the professional ice hockey leagues in both his home country and abroad.

Riley went to the University of Notre Dame located in South Bend, Indiana, in the United States.

Sheahan played Junior B ice hockey in the Greater Ontario Junior Hockey League with the St. Catharines Falcons playing both center and wing. During his first season with the Falcons, Sheahan played with Atlanta Thrasher’s first-round pick Daultan Leveille. He collected 49 goals and 85 assists over two seasons with the Falcons.

Following the two seasons in St. Catharines, Sheahan decided to forgo major junior hockey with the Erie Otters of the Ontario Hockey League to play NCAA Division I college ice hockey with the University of Notre Dame Fighting Irish of the Central Collegiate Hockey Association (CCHA). He played there for three seasons.

On April 5, 2012, the Detroit Red Wings signed Sheahan to a three-year entry-level contract and played for its minor league affiliate Grand Rapids Griffins in the AHL.

On April 7, 2012, Sheahan made his NHL debut for the Detroit Red Wings in a game against the Chicago Blackhawks. Further, on January 11, 2014, Sheahan scored his first career NHL goal against Jonathan Quick of the Los Angeles Kings.

He was invited to take part in Canada’s 2011 National Junior Team selection camp as well as awarded with the OHA Junior B Top Prospect Award – 2008.

Sheahan has not been dragged into much greater controversies or rumors. He, however, has been dragged into rumors regarding his injury. He has, thus far, managed to keep a clean image in the eyes of the public and fans.

Riley Sheahan has a height of 6 feet 2 inches. His body weighs 97kg. Furthermore, he has dark brown hair and light blue eyes.