Actor Rio Ferdinand is married and a father of four.

He was first married to Rebecca Ellison. They were in a relationship in 2006 and from her he had a total of 3 children.

While he was dating her there were also rumors that he was dating Carly Storey. During that time, he was alleged to have affairs with more than 10 different women.  In 2009 Ellison and Rio married but sadly she passed away due to breast cancer at the age of 34.

After that, he married Kate Wright on 27 September 2019. Their wedding was attended by his children and close ones. On 18 December 2020, they gave birth to a boy. 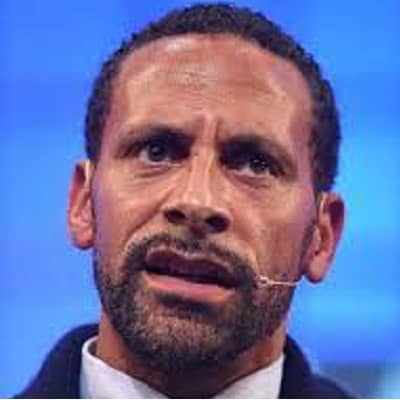 Who is Rio Ferdinand?

Rio Ferdinand is well known British professional football player who has played 81 times for the England national team and was also a member of 3 FIFA world cup squads.

He is one of England’s most accomplished footballers of all time, and many believe him to be one of the country’s best-ever players. Ferdinand is a known actor and producer recognized for Dead Man Running, 90 Minutes, and Rio Ferdinand: Being Mum and Dad.

He was born on November 7, 1978, in Camberwell, England as Rio Gavin Ferdinand. He has British citizenship and is of mixed Irish and Afro-Saint Lucian ancestry.

His mother, Janice Lavender, is of Irish descent, while his father, Julian Ferdinand, is of Afro-Saint Lucian origin.

He was raised in Peckham’s Friary Council Estate as part of a huge family. His mother worked in child care and his father as a tailor to support the family. His parents were never married and separated when he was 14 years old. On his father’s side, he has one brother and three sisters, as well as a brother and sister from his mother’s remarriage. He grew up rooting for Liverpool.

He attended Camelot Primary School. Following that, he went to Black Heath Bluecoat School to meet new people and build his confidence. However, the death of a buddy during his second year indicated that there was a threat of violence. He also liked football, gymnastics, drama, theater, and ballet. For four years, he went to ballet lessons four days a week, traveling to the city center.

Ferdinand began his football career with West Ham United in 1992. He stayed in the youth ranks for three years, where he honed his talents and had the opportunity to compete at a higher level.

He also earned the Hammer of the Year Award for his outstanding performance and lasted two seasons with the club, becoming team captain in 2001.

Rio made his international debut against Cameroon, becoming the youngest defender to play for England at the time. He defeated Cameroon while serving as a substitute. He went on to score three goals for his nation and was England’s second most cheered player.

Rio was regarded as a classic British defender who possessed good leadership qualities and was powerful on both the ground and in the air. He enjoyed the most successful years of his career with Manchester United. When he joined the Red Devils in 2002, he became one of the most expensive defenders in the league. Ferdinand went on to win the Premier League title in his debut season as a Manchester United member. He won the League Cup in 2006, and he was a runner-up in the League Cup in 2003 and the FA Cup in 2005.

He had his best moment on the 21 May 2008 when he captained Manchester United towards a Champion League victory against Chelsea.

Rio retired from international cricket in 2013 to concentrate on his club career. Rio announced his retirement from professional football on May 30, 2015.

Ferdinand has now retired and has joined BT Sport as a commentator for their coverage of various football matches around Europe.

He is a professional football player who has participated in 81 games for England. His all source of income comes from his career and many business ventures. His estimated net worth is to be $75million though he is not one of the top 20 richest players in the world.

There were controversies that he appeared in a sexually explicit video filmed at the Ayia Napa resort in Cyprus in 2000. This was aired as a part of the documentary Sex, Footballers, and Videotapes, stating that it was based on real life.

Ferdinand has appeared on many controversies like these. He was stopped by police for six months in August 2020 after confessing to speeding on the A27 near Hangleton in Hove.   He was fined and ordered to pay a total of £822 in fees and penalties.

Rio stands at the height of 6 feet 2 inches tall and weighs 87 kgs. He usually wears a shoe size of 13 and has not disclosed her body measurement like hips, chest, and waist sizes respectively. He has a black skin tone, black hair, and dark brown eyes.

Rio has a huge fan following base like on social sites. He has 11.2M followers on Twitter with 21.6k tweets, has 5.1M followers on Instagram, and on Facebook he has 9.2M fans. He also has a youtube channel named @ RioFerdinandPresentsFive with 803k subscribers.