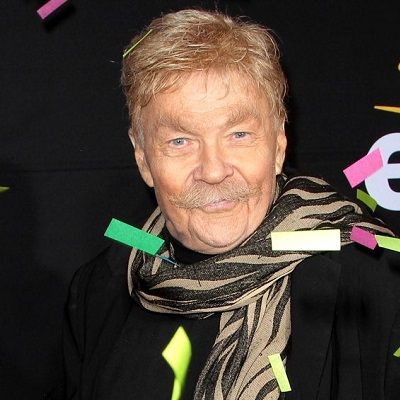 I always wanted to be a Vegas comic, and that's what I am. Las Vegas is the entertainment capital of the world -- if you can make it there, you can make it anywhere. Although I'm not a devout actor, it's nice to be able to do movies and TV, too. I want to be the second banana who works all the time. The ultimate for me would be to stay home and do a TV series for 13 weeks and then go do my nightclub act.

Rip Taylor was married to Rusty Rowe who was a Las Vegas Showgirl. They were married for several years. But divorced in the early 1960s. Taylor was openly gay. As Brent Hartinger received an email about Taylor being gay.

He has a close personal friend Liberace with whom he spent time. He was in a long-term relationship with Robert Fortney. He was with him together till Taylor’s death tore them apart.

Who was Rip Taylor?

Charles Elmer “Rip” Taylor Jr., was famous as Rip Taylor. He was an American actor and comedian.

He was known for his exuberance and flamboyant personality. He had a wild mustache, toupee and showered himself with confetti. Due to that, he was named “The King of Camp and Confetti”.

Likewise, he made thousands of nightclubs and TV appearances.

Taylor expired on 6th October 2019 at the age of 88. He died at Cedars-Sinai Medical Center in Los Angeles being hospitalized after an epileptic seizure the week prior.

His death was confirmed by his publicist Harlan Boll. An array of comedians and performers paid tribute to Taylor onTwitter.

Rip Taylor was born on 13th January 1931 in Washington, D.C., the U.S. to father Charles Elmer Taylor and mother Elizabeth.

Likewise, his father was a musician and his mother was a waitress.

He attended Capitol Page School when he was a teenager.

Taylor was always open about his life and personal matters. He had described in one of his 2010 one-man show that he had a tough childhood.

He was molested when he was in foster care. Not only that he was bullied in school as well.

When he was young, he worked as a congressional page before serving in the Korean War while he was in the U.S. Army Signal Corps.

Later he was sent to Special Services i.e. the entertainment wing of the military. There he performed for the troops in Tokyo and Korea.

Life before TV and Film

After joining the U.S. Army, he started performing stand-up in clubs and restaurants abroad while also performing for the troops. Later he started his nightclub career and worked in the strip clubs in the mid-1950s. he stole most of the Jokes from the USO shows.

When he pretended to cry begging the audience to laugh, it became his first signature piece. His popularity increased and he started performing all over Miami Beach, Florida.

His life took a turn when he was caught performing by a booking agent of The Ed Sullivan Show. He made around twenty appearances which made him gain more popularity.

After being discovered by Ed Sullivan Show, he appeared on The Jackie Gleason Show during the 1963-1964 season as a guest. His most recognized and signature confetti tossing gag came from an appearance in the 1960s The Merv Griffin Show where he was bombing as a stand-up comedian.

Similarly, he was the opener for Eleanor Powell’s dance-focused revue and won Las Vegas Entertainer of the Year in the 1970s three times. He was on the two episodes of The Monkees and Revolutions per Monkee.

His voice performance was in the 1970s cartoon series Here Comes the Grump as the title character and the second edition of The Addams Family cartoon series in 1992, as the voice of Uncle Fester.

Some of the shows he appeared in the 1970s are Hollywood Squares, To Tell the Truth, The Gong Show, The Brady Bunch Hour, The $1.98 Beauty Shows and more other. He appeared as a celebrity on the 1990 version of Match Game. In the year 1990, he voiced the genie in DuckTales the Movie: Treasure of the Lost Lamp.

In the year 1997, he appeared in Beyond Belief: Fact or Fiction. Some of his shows are Brotherly Love, Zork: Grand Inquisitor, Will & Grace.  He made an appearance in The Happy Hooker Goes to Washington, Chatterbox, Things Are Tough All Over and many others. Furthermore, in the year 1993, he appeared as Demi Moore‘s boss Indecent Proposal.

In the year 1966, his first big live show was when he went on a tour with Judy Garland and Eleanor Powell in Las Vegas. He was in the musical comedy in the year 1981. Similarly, he occasionally co-starred Debbie Reynolds in her live show in Las Vegas.

Furthermore, in the year 2010, he appeared in the one-man show It Ain’t All Confetti in North Hollywood.

Rip Taylor: Net worth and Award

The estimated net worth of Rip was $3 million at the time of his death.

Taylor had a height of 5 feet 10 inches. His hair color was salt and pepper and had blue color eyes.

You may also read the age, parents, career, net worth, body measurements of Fran Drescher, Eddie Izzard, and Seth Rogen