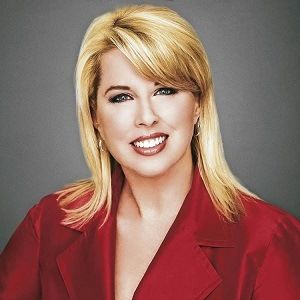 Rita Cosby is possibly single for now. There is no information about her love interest even if she is having an affair with someone. She hasn’t spoken about her boyfriend or whom she is dating currently. Moreover, Rita has been keeping her secrets about her date and ex-boyfriend or husband.

Who is Rita Cosby?

An American television news anchor and correspondent, radio host Rita Cosby. Currently, she is a Special Correspondent for the CBS syndicated program Inside Edition, specializing in interviewing newsmakers and political figures.

Rita Cosby was born in Brooklyn, New York, the United States on November 18, 1964, and she is currently 54 years old. Her father’s name is Richard Cosby and her mother’s name is unknown.

There is no information about her siblings. Rita holds American citizenship, but her ethnicity is unknown. Her birth sign is Scorpio.

Talking about Rita’s education history, she attended Greenwich High School. Then, she earned her bachelor’s degrees from the University of South Carolina.

In addition, she was the first reporter to see prisoners held at Guantanamo Bay. Likewise, she also interviewed Serbian president Slobodan Milošević who called her from his prison cell at the Hague.

Besides that, Cosby also made national headlines for her interviews with boxer Mike Tyson, singer Michael Jackson and convicted serial killer David Berkowitz, “The Son of Sam,” who wrote to her during the Washington, D.C. sniper shootings in October 2002.

Moreover, Cosby served as a lead reporter during the 1996 and 2000 Presidential campaigns. During 2005, Cosby moved to MSNBC to host a primetime weeknight show, Rita Cosby Live & Direct. Additionally, she also conducted rare interviews with Erik Menendez and Dr. Jack Kevorkian, both also behind bars.

Rita got awarded for many times such as Emmy Awards three times, Jack Anderson Award, Matrix Award, Lech Walesa Freedom Award and so on.

Rita Cosby net worth is kept far away from the eyes of the media but without a doubt, she must be earning in millions.

The 54 years-old television news anchor has maintained her celebrity status and has not harmed any other person in her career.

Rita has a height of 5 feet 1 inch. Additionally, she weighs is unknown. Rita’s hair color is blonde and her eye color is green.

Also, read the affair, salary, the net worth, controversy, and the bio of Adam May, Stephanie Sy, Nicole Lapin