Late actress Rita Hayworth was a mother of two.

Rita Hayworth was not a fortunate one when it came to her love life.

At the age of 18, Hayworth married Edward Judson, an oilman turned promoter who was more than twice her age.  They married in Las Vegas. He had played a major role in launching her acting career. However, She filed for divorce from him on February 24, 1942, with a complaint of cruelty.

Other relationships and marriages

In 1948, Hayworth left her film career to marry Prince Aly Khan, a son of Sultan Mahommed Shah, Aga Khan third, the leader of the Ismaili sect of Shia Islam on May 27, 1949.

Due to the playful nature of her husband, they got divorced in 1953. Their daughter Yasmin, then only three years old, played about the court while the case was being heard, finally climbing on to the Judge’s lap.

Then on September 24, 1953, she got married to Dick Haymes, actor and singer. After a tumultuous two years together, Haymes struck Hayworth in the face in 1955 in public at the Cocoanut Grove nightclub in Los Angeles. She walked out and never returned back.

She went on marrying film producer James Hill on February 2, 1958, but filed a divorce on September 1, 1961, alleging extreme mental cruelty. 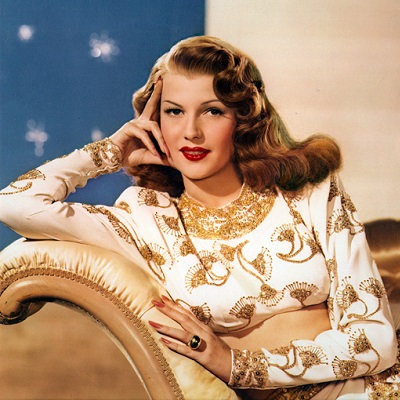 Who is Rita Hayworth?

Rita Hayworth was an American actress and dancer who achieved fame as an era’s top star in the 1940s. She had appeared in 61 films over 37 years.

The press entitled her The Love Goddess and the top pin-up girl. She is on the list of one of the top 25 female motion picture stars of all time in the American Film Institute’s Survey, AFI’s 100 years… 100 Stars.

Born on October 17, 1918, in Brooklyn, New York, US she was the daughter of dancer Eduardo Cansino and actress Volga Haworth. Her original name was  Margarita Carmen Cansino.

She had two siblings:  Eduardo Jr. and Vernon.  She started dancing at the age of three and a half. As a child, she performed in a nightclub act with her father.

Cansino never graduated from high school, but she completed the ninth grade at Hamilton High in Los Angeles.

While still a teenager, Rita Hayworth caught the attention of a Hollywood producer, and in the mid-1930s she began appearing in films, using her given name of Rita Cansino. Movies from this period include Charlie Chan in Egypt (1935), Dante’s Inferno (1935), and Meet Nero Wolfe (1936).

On the advice of her first husband, Edward Judson, who became her manager, she changed her name to Rita Hayworth and dyed her hair auburn. In 1939, she played the second female lead in Only Angels Have Wings.

After 13 minor roles,  Hayworth gradually rose to the rank of a star, playing in melodramas such as The Lady in Question (1940), Blood and Sand (1941), and The Strawberry Blonde (1941). She showed her dancing skills in You’ll Never Get Rich (1941), You Were Never Lovelier (1942), and Cover Girl (1944) making her one of the top stars.  It was also during this time that she became a favorite pinup of American servicemen. Gilda(1946) was undoubtfully her best film.

In the 1960s, Rita’s alcoholic addiction started to circulate. In 1972, the 54-year-old Hayworth wanted to retire from acting, but she needed money, therefore, agreed to film The Wrath of God. But due to her poor health and her worsening mental state, she could not remember her lines.

In truth, Hayworth was suffering from the early stages of Alzheimer’s disease, although she would not be officially diagnosed with the condition until 1980. The publicity surrounding Hayworth’s battle brought national awareness of the disease and brought about federal funding for Alzheimer’s research.

She must have accumulated a huge sum of money from her career however, she has not revealed her exact salary and income. As of 2022, she has an estimated net worth of $10 million.

Hayworth’s father sexually abused her starting at a very young age. He continued to sexually abuse her, calling her his wife and dressing her up in “garish, sexy clothes” while performing in nightclubs.