Rita Ora is an actress, British singer, and songwriter. She is a popular singer having a number of hits songs, "Hot Right Now",  "How We Do (Party)",  "Your Song", "Anywhere". She is in relationship with Andrew Garfield.

Rita Ora is in an on and off relationship with the actor, Andrew Garfield. The couple was linked in 2018 and since then there is the news of their hookups and breakups.

Previously, in 2016, she dated Andrew Watt, and in 2018 the couple separated. While dating Watt, Rita was also accused of flirting the son of Victoria (Posh) and David Beckham, Brooklyn Beckham. 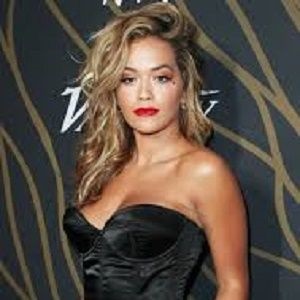 Clothes are fun. The designers have so much fun making them, you should have fun wearing them, too.: I have always liked the contrast between being blonde and having dark features.: I'm a massive fragrance fan - I think the fragrance is part of someone's hygiene, and I'm a big believer in leaving an impression through scent.: Eyebrows are really important because they structure the face. In school, it was funny because I was always the one walking around with tweezers plucking my girlfriends' eyebrows. I was really good

eyebrow tweezing runs in my family - my mother used to do mine, and I picked it up.: To me, it doesn't matter who you are or where you're from - if you're a good person and you got my back, I got yours.

Who is Rita Ora?

Rita Ora is an actress, British singer, and songwriter. She is a popular singer having a number of hits songs, “Hot Right Now”,  “How We Do (Party)”,  “Your Song”, “Anywhere”.

A songwriter was born on  26 November 1990 as Rita Sahatçiu Ora in Pristina, Kosovo, Yugoslavia. her ethnicity is Albanian and nationality is English.

Her father, Besnik Sahatçiu, is a pub owner, having previously studied economics and her mother, Vera, is a psychiatrist and she has an older sister, Elena, and a younger brother, Don.

Because of the persecution of Albanians initiated with the disintegration of Yugoslavia, her family left Kosovo for political reasons. So She grew up in Notting Hill, in West London. She was fond of singing from an early age.

After that, she graduated from a performing arts school, Sylvia Young Theatre School.

Rita Ora began her career by performing at open mic sessions around London and, occasionally, in her father’s pub. Ora had her first music release in 2007 when she appeared on Craig David’s track titled “Awkward”, and in 2008 then again on “Where’s Your Love”, featuring Tinchy Stryder.

In December 2008, Ora signed a recording deal and a publishing deal with Roc Nation and was one of their first signees. Ora released covers and videos about working on her debut album on YouTube throughout 2011. Ora was also the opening act at the UK concerts from Drake’s Club Paradise Tour during February 2012.

As well as it was announced that in September 2012, Ora will be the opening act on the UK concerts from Usher’s Euphoria Tour set to start in January 2013. But it got postponed due to Usher’s “professional and personal commitments. Ora revealed that her second album would be clearer and have more direction than the first one in January 2013.

Furthermore, Ora filed a lawsuit against Roc Nation, seeking release from the label and citing that the contract she signed in 2008 is “unenforceable”, due to California’s “seven-year rule”  in December 2015.

Ora released her first solo single in almost two years, titled “Your Song”, which peaked at number seven in the UK on 26 May 2017. Ora revealed the title of her second studio album, Phoenix, and its release date, 23 November 18 September 2018.

Ora was named an Honorary Ambassador of Kosovo by then-president, Atifete Jahjaga, at the Embassy of Kosovo in London on 10 July 2015.

She has received an international award for the best music in 2015.

She earns a decent amount of money but has been hiding the information to the media or public.

Her estimated net worth is about £20 million which she earns from her profession.

Due to the lyrics in her single, Girls, after it was accused of exploiting bisexuality which leads to great controversy.

Once there was a rumor that she has an affair with Jay-Z.

Rita Ora is a beautiful lady with blonde hair and light brown eyes.