Rita Wilson is an actress, singer, songwriter, and producer. 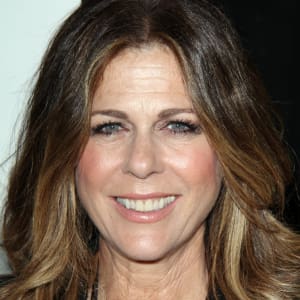 Performing live actually thrills me. Just get me a stage, get me a mic, and I'm going to be happy

The Greek side of me definitely loves a good meal, a lot of laughing, loud discussions

My mother is Greek and my father is Bulgarian. I am a first-generation American and native Los Angeleno. I was born and raised in Hollywood.

Rita Wilson is a married woman. She married actor Tom Hanks on April 30, 1988. Tom is an Academy Award actor.

They have welcomed two sons, Chester, and Truman Hanks.

She has got two stepchildren, Colin and Elizabeth Hanks. Also, she has one grandchild and two step-grandchildren as well.

Rita and Tom infected with Coronavirus?

Reported were that the couple has been diagnosed with the deadly coronavirus on 11th March 2020 in Australia according to the sources. The couple had a checkup after they had tiredness, body aches, chills, and slight fevers, the couple decided to get tested, and the results came back positive.

They have not updated after that. Their son Chet said that they are fine.

Who is Rita Wilson?

Rita Wilson is an American actress, songwriter, singer, and producer. She is also famous for her appearance in the films ‘Sleepless in Seattle’, ‘Now and Then’, ‘Jingle All the Way’, ‘The Story of Us’, and ‘Runaway Bride.’ She is the producer of the film ‘My Big Fat Greek Weeding’.

How old is Rita Wilson?

Dorothea, her mother moved to the US from Bulgaria in 1949. He changed his name to Allan Wilson and converted from Islam to Orthodox Christianity upon his marriage and he can speak Russian, Turkish, Polish, Greek, Italian, and French. She holds American citizenship and her ethnicity is Greek-American.

She attended Hollywood High School and also attended the London Academy of Music and Dramatic Art.

She debuted her career with a guest appearance on ‘The Brandy Bunch’ in the 1972 episode ‘Greg’s Triangle’ in which she played the role of Pat Conway. She made her appearance twice on ‘M*A*S*H’ in 1982 as well as the sitcoms ‘Three’s Company’ and ‘Bosom Buddies’ starring Tom Hanks.

Her other movies include Volunteers, Teen Witch, Barbarians at the Gate, The Bonfire of the Vanities, That Thing You Do!, Jingle All the Way, Runaway Bride, Mixed Nuts,  Invisible Child, The Story of Us, Raise Your Voice, It’s Complicated, Sleepless in Seattle, Now and Then, and Larry Crowne.

Her television series include Frasier, Curb Your Enthusiasm, Law & Order: Special Victims Unit, The Good Wife, Body of Proof, and Girls. She performed the role of Roxie Hart in the revival of ‘Chicago’ from June to August 2006.

Rita Wilson debuted her singing from her solo album ‘AM/FM’ which was released on May 8, 2012, on the Decca Records label. There was included a cover of ‘Wichita Lineman’ in which she performed with the song’s writer-composer, Jimmy Webb.

She announced in April 2015 that she was diagnosed with breast cancer. And she had undergone a double mastectomy and reconstructive surgery.

She returned to Larry David’s ‘Fish in the Dark’ Broadway show after a month. She is also a member of the Greek Orthodox Church.

Rita signed an open letter in 2015 which was addressed to Angela Merkel, Chancellor of Germany, and Nkosazana Dlamini-Zuma, Former South African Minister of Health urging them to focus on women empowerment.

She won Visionary Award for ‘My Big Fat Greek Wedding’ in 2003, Publicist Guild of America for Motion Picture in 2003, Golden Satellite Award for Best Actress in a Supporting Role in a Miniseries or a Motion Picture Made for Television in ‘From the Earth to the Moon’ in 1999, and nominated several times.

She has an estimated net worth of $100 million and her main source of income is from her professional career.

Rita and her husband, Tom Hank’s combined net worth is estimated to be $400 million according to the sources. The couple has a luxurious mansion in Malibu Colony worth $20 million in 2020.

It was heard that Rita has been overwhelmed with her singing ambition that her husband could not take. It has been rumored that the couple is going through a rough road that may lead to divorce.