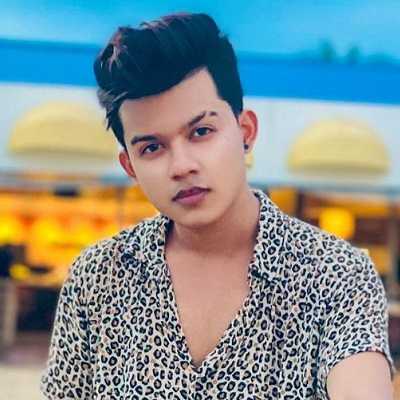 Riyaz Afreen is currently single. To date, he has not introduced anybody as his girlfriend.

Who is Riyaz Afreen?

Indian Riyaz Afreen is a TikTok Star and model. Afreen is renowned for his TikTok videos that went viral on the web.

Last, in January 2020, he appeared in the music video, Superstar along with Anushka Sen. Currently, he is associated with the independent Music Label, Desi Music Factory.

Riyaz Afreen was born on 14th September 2003 in Jaigaun, Bhutan. Later, he was brought up in Kolkata, West Bengal. He is of Far-East Asian ethnicity with an Indian-Muslim family.

He is the youngest son of Shabnam Afreen (mother) and Afroz Afreen (father). He has an elder sister, Riza Afreen.

Moving to his academics, he completed his tenth grade from the Shri Hanuman Mandir Dharamshala School. Currently, he is attending grade 11.

Initially, he came into the limelight when he started making his appearance in TikTok. His very first TikTok video, Teri Pyari Pyari do Aankeya went viral with 15.1 million plays with more than 1.2 million likes. The video made him a TikTok Star overnight. The appreciation that he received from that video inspired him to make such videos.

Following that, he has made TikTok videos with fellow TikTok Star like Avneet Kaur. On June 30, 2020, he uploaded his last video on the app that has earned over 8.7 million plays with over 856.4k likes. Like other TikTok users, he also stopped using the app as it was banned by the Government of India.

Besides that, he also earns through his YouTube channel that he shares with his elder sister, Riza Afreen.

He has black eyes with black hair. He stands at a height of 5 feet and 4 inches and weighs around 50 kg.

He is active on Instagram with the handle, riyaz.14 with 11.1 million.

You may also read the bio, age, parents, career, net worth, salary, and social media of Joe Albanese, Luara Fonseca, and Sheri Easterling.