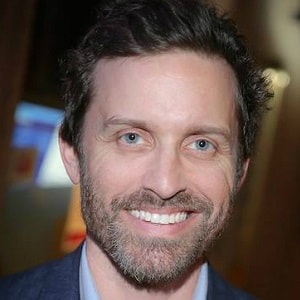 “Endings are hard. Any chapped-ass monkey with a keyboard can poop out a beginning, but endings are impossible. You try to tie up every loose end, but you never can. The fans are always gonna bitch. There's always gonna be holes. And since it's the ending, it's all supposed to add up to something. I'm telling you, they're a raging pain in the ass.”

Rob Benedict is currently divorced after 24 years of marriage with his ex-wife, Mollie Benedict.

Previously he was married man. He was married to Mollie Benedict on 12 August 1995. Mollie is a lawyer and serves for Tucker Ellis Medical & Pharmaceutical Liability Group. The couple has two children. His son’s name is Calvin and his daughter’s name is Audrey Benedict. He currently lives in Los Angeles with his family.

Who is Rob Benedict?

Rob Robert is an American film, stage and television actor and he is best known for his performance in the series like ‘Supernatural’, ‘Threshold’, ‘Felicity’, etc.

He was born on September 21, 1970, in Columbia, Missouri. There is no information about his parents. He was given a birth name as Robert Patrick Benedict and nicknames Robbie and Benny Bob-o. His birth sign is Virgo. Her sister’s name is Amy Benedict and she is also an actress. He holds American citizenship but his ethnicity is Mixed(English, Irish, German, French).

He has completed his Bachelor’s Degree in Performance Studies. Apart from that, there is no detail information about his schooling available.

After his completion of graduation, he developed his interest for theatre and he started performing in regional theaters across the country. He also portrayed the role of James Dean in a one-man show in Chicago and L.A.

Rob started performing in sketch comedy shows and soon he performed as a stand-up comedian. He used to host a monthly show ‘Die Laughing’ where he performed with comedians Tig Notaro, Paul F. Tompkins, and Zach Galifianakis.

After his several roles in TV, he cast as ‘Richard Coad’ in the series ‘Felicity’, which he carried for 4 years. He has performed his interest in more than 50 episodes of television over his career. He played the role of Chuck Shurley in the series ‘Supernatural’ and as Jeremy Berger in ‘Head Case’.

Rob also portrayed the role of Lucas Pegg in the sci-fi drama ‘Threshold’, Brodien in ‘Alias’, Judah in ‘Come To Papa’. He also made his guest appearance in ‘The Mentalist’, ‘Shameless’, ‘Psych’, ‘Cold Case’, as well as he portrayed the recurring role on ‘Touch’, ‘Franklin and Bash’, ‘Chicago Hope’, ‘Birds of Prey’, etc.

Rob played the opposite role to Jenna Fischer in ‘A Little Help’, as a role of Calvin in a comedy film ‘Waiting’. He has made his remarkable appearance in ‘State of Play’, ‘Kicking and Screaming’, ‘Six and Death 101’, ‘The First 20 Million is Always the Hardest’ ‘Two Days’, etc.

He debuted at the 2013 Comic-Con in San Diego in which he wrote, produced and starred the independent short film ‘The Sidekick’.

Besides that, he was also seen in the LA-based rock band Louden Swain in the fifth record ‘Sky Alive’ which was released in the Spring of 2014.

There is no award and nomination in his name to date but we can expect many awards from his career in the near future.

It is estimated that he has a net worth of $1 million and is salary is not available through any sources.

Rob suffered from a stroke in the year 2013, while he was shooting for ‘The Supernatural.’ He could have lost his life but one of his close friends, Richard Speight Jr and other volunteers saved him because of instant cure. Then in 2014 itself, he started working.

He has height is 5 ft. 8 inches and his weight is 70kg. His chest, waist, and biceps are of size 39, 32 and 14 inches respectively. He has blue eyes and light brown hair.