Updated On November 15, 2022 | Published By: Macmillan
Share this
Divorce 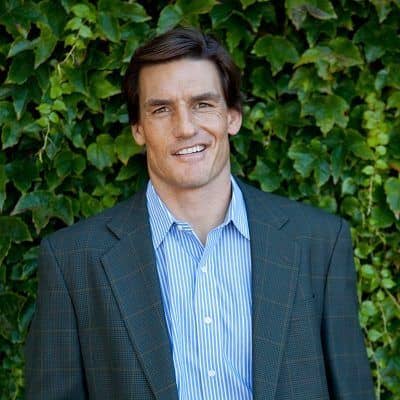 Who is Rob Born dating after the split from his former partner?

Talking about his relationship details, Rob Born is possibly single and he might not be dating anyone at the moment.

Previously, Rob was in a married relationship with an American actress and singer, Leslie Bibb.

The former couple began dating in the early 2000s and tied the knot in a private manner on 22 November 2003 in Zihuatanejo, Mexico. However, they separated soon on 7 December 2004 without any unclosed reason.

Who is Rob Born?

Rob Born is a well-recognized American Investment Banker and celebrity ex-husband. Born is widely famed as the former husband of a popular American actress and singer, Leslie Bibb.

Rob Born was born in the year 1973. At present, he is 49 years young star. Likewise, his birthplace is New York, the USA.

Not much is known about his father and mother’s details, Rob has been secretive about his family details. Moreover, he has not mentioned his sibling’s information in the public yet

Talking about his nationality, Born holds an American identity whereas his ethnicity is Caucasian.

Regarding education, the investor attended Amherst College and finally moved to Duke University. Also, he completed his degrees in B.A, M.B.A, and J.D.

Rob is professionally an American investment banker and a well-known personality. He became part of Vocera in July 2014 as the Vice President of Business and Corporate Development.

Additionally, the investor worked as a partner in the initial days of the technology venture capital fund Thomas Wiesel Venture Partners.

Moreover, Born was accountable for investments in the wireless, enterprise software, health It, and home automation sectors.

Ahead of that, he worked as an investment banker with Thomas Weisel Partners as Vice President from February 1999 to February 2001.

The banker also worked as a Montgomery Securities as Associate from August 1998 to February 1999 and provided support to tech companies with IPO, M&A, and private placement transactions.

A famed personality, Born has earned a handsome amount of money from his profession. He lives a quality lifestyle along with his family.

It is reported that Rob Born has an estimated net worth of $1 million as of 2022. His former wife, Leslie has a net worth of more than $4 million.

However, the banker has not disclosed his exact salary, earnings, and assets details till now.

Rob has never been part of any controversial matter or rumors till now. The star has been preoccupied with his professional and private life.

It seems that Born prefers enjoying his personal life and does not want to merge it with his professional life.

49 years young star, Leslie has handsome looks and an admirable personality. He stands at a height of 6 feet 2inches. Also, he has a balanced body weight of 85kg.

Furthermore, Born has black eyes whereas his hair is black.

Nevertheless, the star has never mentioned other physical details to the public yet.

Regarding his social media presence, Rob Born is an active personality on social media. Rob has no official Instagram, Facebook, or Twitter accounts at the moment.

Moreover, the star does not prefer sharing his personal life on social media.