Havenstein is a married man. He is married to Meaghan Leah Conway.

The couple met each other and started dating while attending The University of Wisconsin. They got married on March 17, 2017, in Santa Barbara, California.

They have two children. Their first daughter Bria Rose was born in October 2018. 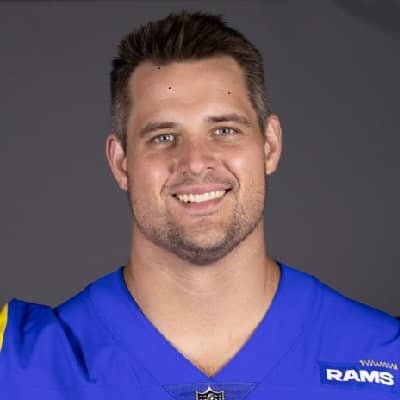 Who is Rob Havenstein?

Rob Havenstein is an American football player. He is the offensive tackle for the Los Angeles Rams of the National Football League (NFL).

The player was selected by the Rams in the second round of the 2015 NFL Draft.

The player has his schooling at Linganore High School. He attended The University of Wisconsin. He has his major in science communication.

Havenstein used to play football in Wisconsin. From the year 2010 to 2014, he plays as a right tackle on Wisconsin’s offensive line. Havenstein played a total of 54 games and started 42 of them throughout his five-year career. In 2010, Havenstein represent as a redshirt freshman.

The next year he appeared in 12 games and started every game for the next three years. He was named to the media’s second-team All-Big Ten team, in 2013.

The AFCA selected him consensus first-team All-Big Ten and first-team All-American in the 2014 end season. Hevensteinn was the only Badgers player invited to compete in the 2015 Senior Bowl at the conclusion of his fifth year.

In 2017, Havenstein was treated by Detroit Lions. And then on August 20, 2018, the player signed a four-year contract extension with the Rams through the 2022 season.

His career earning is estimated as below:

The player has always been focused on strengthening his career. He stays out of the news relating nay controversies or rumors in the media.

The athletic stands tall with a height of 6 feet and 8 inches and weighs around 156 kg.

He has brown colored hair with beautiful blue eyes. Havenstein has a tattoo on his arm with Led Zeppelin lyrics.

The player is active on Instagram with over 12.9K followers. He isn’t active on any other social media platforms.

You may also read the bio of Tyler Johnson, Brad Green, Christy Giles, and Jose Mourinho.