Rob Kardashian is a television personality and businessman.

Rob Kardashian has been involved in several relationships in his career. In July 2007, he dated American Model Kara Monaco. Next, from September 2007 to May 2009, he was romantically involved with American Actress Adrienne Bailon.

In 2011, he dated the Dominican Model Rosa Acosta for a brief amount of time. He then had a relatively stable relationship with Kosovar Singer Rita Ora from November 2011 to December 2012. Next, he had a 5-month relationship with British Model Naza Jafarian from March to August 2013.

In the year 2013, he also dated Filipino Model Daphne Joy. From 2014 to 2015, he was involved in a relationship with American Model Amina Blue.

Rob began dating model Blac Chyna in January 2016. The pair soon announced their engagement on April 5, 2016. They announced the engagement via Instagram after three months of dating. It was reported in May 2016 that the couple was expecting their first child together. They confirmed in September 2016 that they were having a girl.

On November 10, 2016, daughter, Dream Renée Kardashian was born. The pair announced their split on social media after Chyna’s Instagram account was hacked on December 17, 2016. Rob announced in December 2016 that he and Chyna have split. Rob is currently dating reality star, Mehgan James. 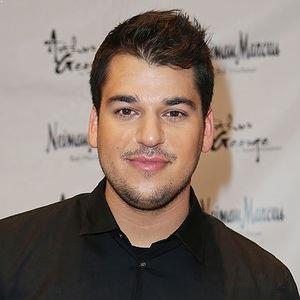 I feel like more than 80% of the world wouldn't get up in front of 40 million people and dance on national television, and if I have the confidence to do that then that's a step ahead in my life for me in terms of personal goals. I will gain a lot of confidence in all aspects right there.

Who is Rob Kardashian?

Rob Kardashian is an American television personality and businessman.

He appears in the reality television series ‘Keeping Up with the Kardashians’, a series that centers on his family. In addition, he also competed ABC’s ‘Dancing with the Stars for the show’s thirteenth season.

Rob was born in Los Angeles, California on March 17, 1987, to Robert Kardashian and Kris Jenner as Robert Arthur Kardashian. He is of American nationality.

He has three older sisters, Kourtney, Kim, and Khloé. Furthermore, he belongs to a mixed ethnic background of Armenian, English, as well as Scottish, Irish, German, and Dutch.

His parents divorced in 1991. Next, his mother married Olympic decathlete, Bruce Jenner. After the marriage, he gained step-brothers Burton, Brandon, and Brody, step-sister Casey; and half-sisters Kendall and Kylie Jenner.

His father was one of the lawyers in the O.J. Simpson murder trial. Moreover, Rob became interested in the entertainment world in his early life.

Talking about his education, Rob attended the University of Southern California’s Marshall School of Business. Later, he graduated there in 2009.

After graduation, signs pointed to him continuing to law school. Later through Twitter, it was found that he hadn’t applied for the course.

Rob Kardashian’s family became part of the pop culture through their reality show ‘Keeping Up with The Kardashians’. The show debuted in 2007. After graduation, he soon gained fame and name recognition after appearing on other reality/competition shows like ‘Dancing With The Stars’ and ‘The Choice’.

Furthermore, he also appeared in ‘The 2012 Miss USA Pageant’. Apart from his television career, Rob is fairly active in the designing world as well. He launched a designer sock business called Arthur George in 2012.

It was announced in 2016 that he would star in another reality show spin-off entitled Rob & Chyna, which premiered in September. In addition, Rob is also involved in other business ventures like PerfectSkin, Rival Spot, and the BG5.

Rob’s salary is $120,000 per episode in ‘Keeping up with the Kardashians’. Furthermore, his net worth totals an estimated amount of $10 million.

Talking about body measurement, Rob Kardashian has a height of 5 feet 11¼ inches. In addition, he weighs 89 kg or 196 pounds.

Furthermore, his hair color is black and his eye color is dark brown. He has a shoe size of 13 (US).

Rob is quite active on social media. He has a huge number of followers on social networking sites such as Facebook, and Twitter.

He has more than 7.3M followers on Twitter. Similarly, his Facebook page has more than 2.2 M followers. His Instagram account was suspended after he posted a series of messages about his ex, Blac Chyna.

Barbara Corcoran
Tags : American businessman Dancing with the Stars Keeping Up with the Kardashians

Rob Kardashian Is Looking For The Primary Custody of Daughter Dream; Also Asks For Test Of Drugs And Alcohol Of His Ex Blac Chyna!!