Rob Kenney is living a blissful conjugal life. He is married to a girl named Annelli. The beautiful couple tied the wedding knot in 1991.

On January 26, 2021, Kenney shared a picture with his wife, celebrating their 30th anniversary on Instagram.

They are blessed with two children a daughter named Kristine and a son named Kyle. 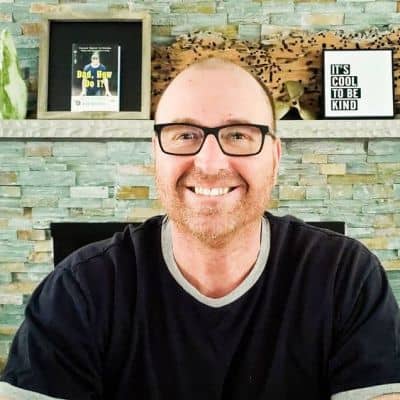 Who is Rob Kenney?

Rob Kenney is an American author, YouTuber, and social media influencer. He is popular as YouTuber and better known online as Dad, How do I?.

Rob was born in the year 1963 as per other online sources. However, his precise birth date is still under review. According to his birthdate, he is 57 years old. He hails from Washington, United States.

Rob hasn’t disclosed his parent’s identity in the media. When he was 12, his father left. He has a sister named Mary. Further, his academic background is also under the curtains.

He holds an American nationality and belongs to the Caucasian ethnicity. He follows the Christianity religion.

On April 1, 2020, Rob created a YouTube channel named Dad, how do I do? where he teaches basic things that a kid asks his father. His main focus is to teach kids who’re growing up without dads. On May 17, 2020, he came into the limelight when his story went viral on social media.

On May 19, 2020, someone named “Chris Hart” posted his story on Facebook which also went super-viral over the world. As of now, he has over 3.66m subscribers on his channel. He got his golden play button earlier than his silver play button. Kenny also published his own book Dad how do I where he mentioned his life experience and practical advice for everyday tasks.

As of now, he hasn’t been part of any sorts of rumors and controversial matters that create headlines in the media.

Rob might have earned an impressive amount of wealth from his successful career. However, he hasn’t yet revealed his net worth, salary, and other earnings in the media.

The 57 years old personality has a fit and healthy body physique. He stands at the height of 5 feet 11 inches tall and his weight is about 80 kg.

Likewise, he has a dark brown pair of eyes and dark brown hair color.