Actor Rob Lowe is married and a father of two. 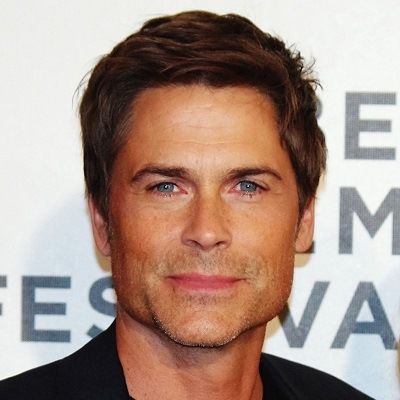 When I was young and crazy, I was young and crazy. It can be hard enough just to BE in your teens and 20s. Then add fame, money, access, and every single person telling you that you're the greatest person who ever was, and it can be a recipe for disaster. Some people literally don't survive it.

One of the great gifts we get (as actors) is that we live on, frozen in time, forever... Truly, the most fulfilling moments I've ever had are on the stage. If you can't have that as an actor, then you might as well at least have that other great thing, which is immortality.

A few years ago I got to a point where I realized that the only way you can tell someone's age is how they live their life. The candles on the cake mean absolutely nothing.

Rob Lowe met American actress Melissa Gilbert when she was 17 years old. The two instantly fell in love but both of them admitted to having discretions in their relationship. Melissa slept with his best friend John Cusack upon learning of his affair with Nastassja Kinski in 1983.

However, they stayed together and Lowe proposed to her in 1986. Gilbert was pregnant with his child but suffered a miscarriage and it brought an end to their relationship. Rob then dated German actress and former supermodel, Nastassja Kinski while filming The Hotel New Hampshire. He was dating Melissa at the time and was even caught red-handed in Kinski’s hotel room by Melissa.

Rob hooked up with Jodie Foster in the 1980s. Rob met Princess Stéphanie of Monaco while promoting his film About Last Night in France in 1986. They subsequently met through one of Rob’s friends, Glenn Souham. He dated Winona Ryder on the set of Square Dance when Winona was 13 years old and Rob was 21.

Tara Siebert was 22-years old and working as a receptionist when she met him in a nightclub in 1986. Marlee Matlin is also one of the many ladies who have dated Rob Lowe in the past. They dated for about a year in 1987 and broke up in 1988.

Laura Dunlop and Rob Lowe were pictured attending Janet Jackson’s party to celebrate the album Rhythm Nation. American TV personality Tracy Richman and Rob were linked together in 1990 and have since broken up. He dated Cornelia Guest, Rob was also linked with Marisa Morris in the past.

Rob met makeup artist Sheryl Berkoff for the first time on a blind date in 1983. They met for the second time while he was shooting for Bad Influence in 1989.

Who is Rob Lowe?

Rob Lowe is an American actor, producer, and director.

Likely, he is the recipient of two Screen Actors Guild Awards and has been nominated for six Golden Globes Awards and a Primetime Emmy Award.

Rob Lowe was born in Charlottesville, Virginia, the United States on March 17, 1964. His birth name is Robert Hepler Lowe. His father’s name is Barbara Lynn and his mother’s name is Charles Davis Lowe.

Lowe was baptized into the Episcopal church. Likewise, as an American POW, his ancestor was given a choice and took the option to stay in the United States.

Talking about his profession, in 1983, Rob Lowe was starred for the first time in the television film ‘Thursday’s Child’, a story about a 17-year-old boy.

In the same year, he got his first major role in ‘The Outsiders’, an American drama film. In the year 1985, he appeared in ‘St. Elmo’s Fire’, an American coming-of-age film directed by Joel Schumacher.

In the year 1986, he starred opposite Demi Moore in the comedy-drama ‘About Last Night’, directed by Edward Zwick. Whereas, his role as ‘Rory’, a mentally disabled person in the 1987 drama film ‘Square Dance’, directed by Daniel Petrie.

In the 1990s, he appeared in films like ‘Wayne’s World’, ‘Contact’, ‘Austin Powers: The Spy Who Shagged Me, and ‘The Specials’. In the year 1999, he acted in the NBC television drama, ‘The West Wing’ as ‘Sam Seaborn’, one of his best-known roles to date.

He became successful in the miniseries genre in the late 1990s. During 2004 he starred in TNT’s miniseries ‘Salem’s Lot’, an adaptation of Stephen King’s novel of the same title.

He played the role of ‘Lieutenant Daniel Kaffee’ in Aaron Sorkin’s play, ‘A Few Good Men’ in 2005. In the same year, he starred on Lifetime Network’s miniseries, ‘Beach Girls’.

In 2007, he acted in the television film ‘Stir of Ethos: The Homecoming’, which premiered on the ‘Sci-Fi-Channel’, an American cable television channel.

Likewise, in 2009, he was cast in ‘The Invention of Lying, a comedy film directed by Ricky Gervais, and also he played the lead role in the movie ‘Too Late To Say Goodbye’ In 2010, he featured in the biographical series the ‘Brat Pack: Where Are They Now.

He also made an appearance on ‘The Tonight Show with Conan O’Brien’.

He won Worst Supporting Actor for St. Elmo’s Fire (1985) at Razzie Awards. He also won Outstanding Performance by an Ensemble in a Drama Series for The West Wing (1999) at Screen Actors Guild Awards.

He has an estimated net worth of around $100 million (as per 2021 data) and he has earned that sum of money from his professional career.

Being an award-winning actor, he is living a lavish life.

There was a rumor that Rob Lowe is gay. Another rumor, he was rumored to have hooked up in the 1980s with Jodie Foster. Currently, he is far from rumors and controversies.

Rob Lowe has a height of 5 feet 10 inches. Additionally, he weighs 78Kg. His hair color is dark brown and his eyes color is blue.

The Six-Year-Old Brave Boy Bradley Lowery battling the rare form of cancer Neuroblastoma has died! His Relation with Jermain Defoe and the emotional Tribute!! Find out Who is Bradley Lowery? What is Neuroblastoma and what is his relationship with football world?!