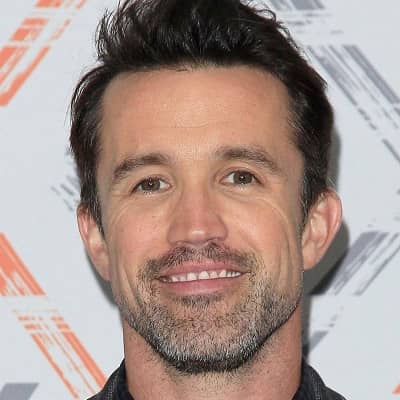 Look, it’s not that hard. All you need to do is lift weights six days a week, stop drinking alcohol, don’t eat anything after 7pm, don’t eat any carbs or sugar at all, in fact just don’t eat anything you like, get the personal trainer from Magic Mike, sleep nine hours a night, run three miles a day, and have a studio pay for the whole thing over a six to seven month span. I don’t know why everyone’s not doing this. It’s a super realistic lifestyle and an appropriate body image to compare oneself to.

Rob McElhenney is a married man. He exchanged his vows with an actress Kaitlin Olson on 27 September 2008, in California. This couple first met in the first season of It’s Always Sunny in Philadelphia.

Who is Rob McElhenney?

Rob McElhenney is an American actor, screenwriter, producer, and director. He is best known for his role as Ronald McDonald in a comedy television sitcom It’s Always Sunny in Philadelphia.

This actor was born on 14 April 1977, in Philadelphia, Pennsylvania, in the US. His father‘s name is Robert, and his mother’s name is Helena.

He has two gay brothers. Rob also has a half-brother and half-sister from his dad’s side. His mother came to as a lesbian, and his parents got divorced, when he was 8 years old.

He was raised by his father. Rob attended Saint Joseph Preparatory School. Afterward, he graduated from Temple University. He belongs to Irish descent.

Earlier, Rob McElhenney made his career debut with a small role in movies like The Devil’s Own, Wonder Boys, A Civil Action, and Thirteen Conversations About One Thing.

Although his role in Wonder Boys and The Devil’s Own was deleted in the final edit, he was dedicated to mark his presence in Hollywood. Afterward, he appeared in considerable parts in The Tollbooth, Latter Days, and Law & Order episode Thrill.

He moved to Los Angeles from New York to pursue his further career at age 25. Rob signed with FX and was contracted as It’s Always Sunny’s showrunner.

He made his appearance in the third episode of Lost and continued to appear in the sixth season for an episode. Afterward, in 2013, he wrote the season 9 episode of It’s Always Sunny in Philadelphia ‘Flowers for Charlie’.

In 2015, Mojang Studios confirmed that Rob will be the director of the upcoming animated movie Minecraft. McElhenney has gust appeared in the TV series Fargo episode ‘The Law of Non-Contradiction’.

Since 2005, he is working as a writer, producer, creator, actor, and director of It’s Always Sunny in Philadelphia, from which he gained huge popularity.

He has worked as executive producer and actor in several TV series and sitcoms including How to Be a Gentleman, Living Loaded, Unsupervised, The Mindy Project, The Cool Kids, and Spike’s face.

Later, in 2019, McElhenney made a cameo appearance in the Game of Thrones episode ‘Winterfell’. Recently, in 2020, he worked as an executive producer, writer, creator, and director of Mythic Quest: Raven’s Banquet.

Wrexham Supporters Trust announced that Rob and Ryan Reynolds were in talks to purchase Wrexham AFC on 23 September 2020.

Rob McElhenney: Salary and Net Worth

Rob makes an impressive salary of $450,000 per episode. Meanwhile, according to some sources, he has an estimated net worth of $50 million.

There is no rumor and scandal about Rob. Meanwhile, He has managed to keep himself out of any controversy and rumor. Rob is doing great in his career.