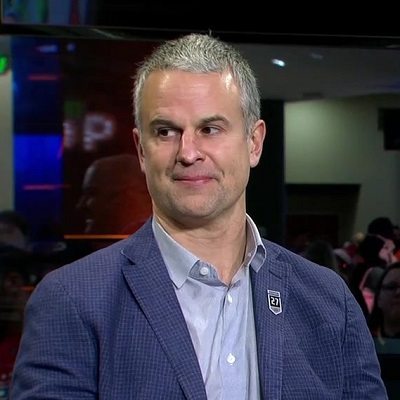 What is the relationship of Rob Niedermayer?

Rob Niedermayer is happily married to his girlfriend, Jessica Bentall. His wife, Jessica is the daughter of the Pop singer and songwriter, Barney Bentall. The couple has been dating since March 2001.

Who is Rob Niedermayer?

Rob Niedermayer is a former professional ice hockey player. He is renowned for his playing style as Right Wing.

Rob Niedermayer was born on 28th December 1974 in Cassiar, British Columbia, Canada. His birth name is Robert Wade Niedermayer Jr. He is of British-Irish-Germanic ethnicity.

He is the younger child of his parents; Carol Niedermayer and Bob Niedermayer. His elder brother, Scott Niedermayer is Canada’s Sports Hall of Fame inducted ice hockey defenceman. His father, Bob was a doctor by profession whereas his mother, Carol was a teacher.

Along with his elder brother, he spent his childhood in Cranbrook. Since childhood, both of the brothers liked to play hockey. Also, they shared a strong bond with their parents.

Their father often took them to teams of doctors where their mother used to teach them to skate. Also, she enrolled them to figure skating. Details on his academics are not available.

In 1990, Rob Niedermayer started his career with the Medicine Hat Tigers in the junior hockey league, Western Hockey League. In the season, he scored 24 goals with 26 assists. After the year, he completed two seasons with the team with scores of 32 and 43.

In 1993, he entered National Hockey League drafted by the Florida Panthers. The year, he scored 9 scores with 17 assists. Moving forward, in 1995, he scored 82 goals in NHL which became his career high with 26 assists scores.

The same year, his team, the Panthers went to the finale of the Stanley Cups. However, the team got defeated by the Colorado Avalanche. After that, he started playing as the defensive forward as a result of the concussions that he received during the following years.

Till 2001, he played for the Panthers. In 2001, he was traded to the Calgary Flames in exchange for Valeri Bure and Jason Wiemer. That year, he scored 57 goals for the team. In 2003, the Flames traded him, to Mighty Ducks of Anaheim.

In 2007, he was traded again to the Anaheim Ducks once more. The year, his team won the Stanley Cup along with his brother, Scott. Also, he scored 82 goals with 5 assists. On 25th September 2009, he signed with New Jersey Devils. The following season, he signed a one-year contract worth $1.15 million with Buffalo Sabres.

Rob Niedermayer has brown eyes with light hair. He stands at a height of 6 feet 2 inches and weighs around 93 kg with a built body type.

To date, he has not been through any sort of controversy and scandals that created a buzz in the media. Besides that, he has managed to maintain distance from any type of rumors.