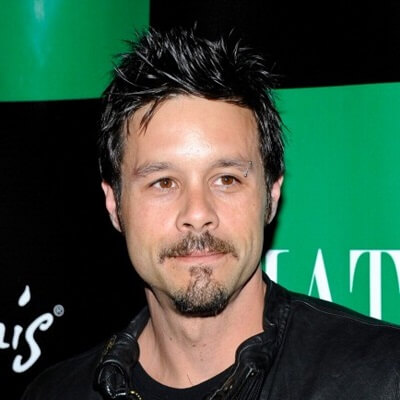 Rob Patterson currently seems to be single and focused on his career.

Previously, he was engaged. In 2008, he announced his engagement to Carmen Electra. Electra is an American Actress who became known for her role on the TV series, Baywatch. Some of her other film credits include Meet the Spartans, Bedtime Stories, Cheaper by the Dozen 2, Epic Movie, and Disaster Movie.

The two broke up about four years of togetherness. They did not get married and called off their engagement in 2012. The actress claimed Patterson was having difficulties remaining sober and that he partied too frequently.

Who is Rob Patterson?

Rob Patterson is an American musician, guitarist, and composer. He was a touring guitarist for the American nu metal band, ‘Korn’ from July 2005 to March 2008.

Rob Patterson was born as Robert Christopher Patterson on November 9, 1970, in Natick, Massachusetts, United States. As of 2020, his age is 49. He has not revealed much about his family and early life.

There is no information about his parents and siblings. He spent his childhood days in Natick. He loved playing guitar and was interested in music from a young age.

Rob Patterson first came into the limelight after joining the metal band with a female lead, ‘Otep’. While he was with the group, he contributed by writing and playing on several albums including ‘Smash the Control Machine’, ‘House of Secrets’, and ‘Sevas Tras’.

In mid-2005, he became a touring guitarist for the American nu metal band, Korn after the departure of Brian Welch. During that time, the band released several studio albums, including ‘See You on the Other Side’ and a 2007 untitled album. Despite having no name, the untitled album went gold and sold nearly one-point-five million copies domestically. He left the band in 2008.

After leaving Korn, he became heavily involved in DJing. He specializes in house, hip-hop, dance, and rock music when he’s spinning tables. Also, he enjoys playing guitar at the same time he is working as a DJ.

He featured in Paul Miles’ book, ‘Sex Tips from Rock Stars’, which was released in the summer of 2010.

Patterson has also tried his hands in acting. He appeared as a police officer in the slasher short film, ‘Massacre’ in 2015 which was written by New Zealand Suicide Girl Pandie Suicide and directed by Erik Boccio. Moreover, he also co-scored the movie with Jeordie White of Marilyn Manson.

How much is Rob Patterson worth?

Rob Patterson has an estimated net worth of around $10 million. There is no information about his salary. On average, a professional guitarist earns around $70k a year.

Rob has black hair and brown eyes. He has not revealed his height and weight. Also, there is no information about his shoe size, chest size, waist size, biceps size, etc.

The guitarist has not been involved in any controversies. He has been able to keep himself away from any type of controversy and scandal. So far, he has not done anything controversial in his acting career. Similarly, there are no rumors about his of any kind.

You may also like to read the Bio, Career, Body Measurements, Net Worth, Social Media, Relationships, and more about Slade Smiley,  Jack Davenport,  Nick Cordero, and more.