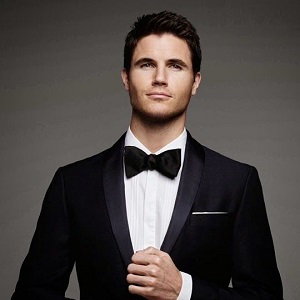 It's not really a guilty pleasure, but I love old cartoons. I could watch Bugs Bunny and Tweety all day long

I grew up watching 'Power Rangers,' 'Ninja Turtles', 'Batman.' You name it, I was a huge fan. And that's what I used to play with my friends. We would have the masks and the swords and pretend we had super powers

My girlfriend doesn't think I'm funny at all.

Robbie Amell had been dating a Canadian actress Italia Ricci since 2008. They were living happily and decided to get engaged on August 20, 2014.

As their relationship went on the long track they decided to get married. The couple had got married on 15th October 2016.

This couple was blessed with a child in Sep 2019. They named their son Robert Amell V.

Who is Robbie Amell?

Robbie Amell is a Canadian actor as well as a model. He has worked in many films and television but his most popular plays were The Tomorrow People as Stephen Jameson, Deathstorm on The CW’s series, The Flash, Fred Jones in the films Scooby-Doo! The Mystery Begins and Scooby-Doo! Curse of the Lake Monster.

The actor Robbie was born on 21st April 1988, in Toronto, Ontario, Canada. His nationality is Canadian and ethnicity is mixed(English, Scottish, German, Irish, French-Canadian, Welsh, and Dutch).

His nickname is Picky. He is the son of Jo (Burden) and Rob Amell, who worked in the custom jewelry business. When he was 6 years old he had started his acting career in small commercial roles.

When he had turned 16, he began landing roles in high school plays such as Louis and Dave and Fiona, Picasso at the Lapin Agile and The Importance of Being Earnest.

His interest in acting made him go to the Canadian Studios Acting Academy. He had completed his graduation at Lawrence Park Collegiate Institute in 2006.

As soon as his graduation had finished he had joined in the acting field in 2005. Robbie Amell’s first role was Daniel Murtaugh in Cheaper by the Dozen 2, which filmed in the Muskoka Region of Ontario and also had appeared in the 2007 horror film Left for Dead.

In the same year, he had appeared in a movie American Pie Presents: Beta House. In 2008 and 2013 he had appeared on the television show, This picture, and The Hunter. But in 2015 he was nominated for Teen Choice Award for Choice Movie Actor: Comedy.

From 2015 to 2017 he has played many films like Max, Code 8, Nine Lives, ARQ, The babysitter, and When we first met. Not only films he has also appeared on the television show from 2006 to 2016. He has played in the series like Runway, Life with Dereck, True Jackson, Unnatural history, Brothers, and sisters and much more.

Robbie has a net worth of $ 2 million. His current salary is not known.

Unlike other actors, Robbie Amell hasn’t suffered from any kind of rumors. He is talented in acting as well as he knows how to treat with the media and social sites.

Robbie Amell has a height of 6 feet 2 inches. His body weighs 79kg. He has dark brown hair and hazel blue eyes.