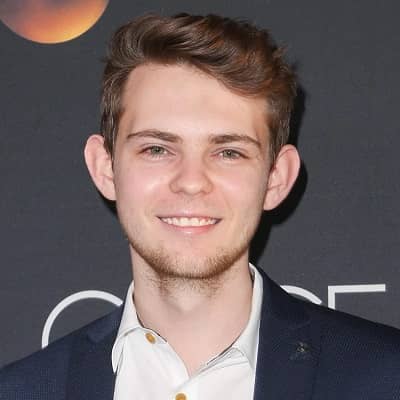 What is the relationship of Robbie Kay?

Talking about Robbie Kay’s relationship, he is currently engaged to his long-time girlfriend Kerry Hennessy, a costume designer, stylist.

They have been dating each other since 2016 approximately for 5 years.

The couple often posts about their relationship on Instagram and expresses their love for each other.

Who is Robbie Kay?

Robbie Kay is a British television actor mostly known for Pirates of the Caribbean: On Stranger Tides(2011), Once Upon a Time(2011), and Fugitive Pieces(2007) television series.

In 2007, he made his acting debut with a small role in the film ‘Hannibal Rising.’

Robbie was born on September 13, 1995, in Lymington, Hampshire, England. As of now, he is 26 years old. At an early age, he moved to Brussels, Belgium. His birth name is Robert Andrew Kay.

Kay moved to Prague in the Czech Republic where he attended the International School of Prague. Since 2011, he has been residing in Houston, Texas.

Robert is a British actor famous for working in television series like Fugitive Pieces(2007), Pirates of the Caribbean: On Stranger Tides(2011), Once Upon a Time(2011).

In 20017, he made his acting debut with a small role in the film ‘Hannibal Rising’. When he appeared playing the titular role in the miniseries ‘Pinocchio’, he received a huge break the following year.

He played a supporting role in the drama film ‘Fugitive Pieces’ in 2007 which was successful. Moreover, he was more successful on TV series such as ‘Once upon a Time’ and ‘Heroes Reborn’.

He appeared in the British musical drama ‘Made in Dagenham,’ which featured him in the supporting role of ‘Graham’ in 2010.

Robbie starred in the romantic comedy ‘No Passage Necessary’ where the film received mixed reviews from the audiences.

Robert was cast as a high school student named Tommy Clark in the Tv series Heroes Reborn in March 2015.

Robert is ranked as the most popular TV Actor. His net worth is estimated to be around $1 million-$2 million. Though, he has not disclosed his salary and income yet.

As a television actor, Robbie has not been a part of any rumors or scandals up to date. He keeps himself away from unwanted controversy.

Robbie has an attractive personality with a height of 5 feet and 6inches and weighs around 63kg.

He has medium brown colored hair and is blessed with greyish blue eye color.

Also, he is active on Facebook where he has more than 285k followers. He has a Tiktok account under the username @robbiekaylive with 93.3k followers.