English singer and entertainer Robbie Williams is married and a father of three. 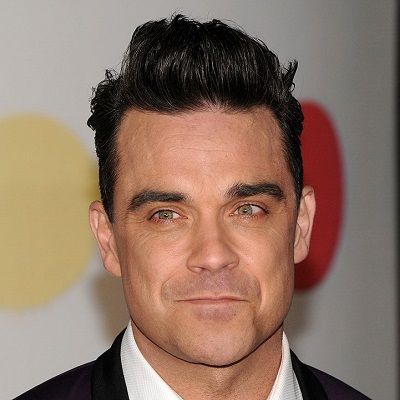 I'm rich beyond my wildest dreams.

I'd make a better U.S. President than George W. Bush. Bush is an idiot. I'm a better public speaker than him. It makes you wonder about the voters.

Inside me there is a fat man dying to get out.

Robbie Williams was in a relationship with Ayda Field from May 2006. She is an American actress. On 26 November 2009, he proposed to Field live on the Australian radio channel. It was known that they engaged over Christmas and married on 7th August 2010.

Who is Robbie Williams?

Robert Peter Williams known as Robbie Williams is an English singer-songwriter and entertainer. From the year 1989 to 1995, he found fame as a member of the pop group Take That.

Similarly, he sold more albums in the UK than any other British solo artist in history.

He was born on 13th February 1974 in Stoke-on-Trent, Staffordshire, England. He is the son of Peter Williams(father) and Janet Williams(mother).

Similarly, he has a sister named Sally Williams. His father ran a pub called Red Lion in Burslem.

Besides, he belongs to British nationality and his ethnicity is mixed (Irish, English, and Welsh).

Talking about his education, he attended St Margaret Ward Catholic School in Tunstall, before attending dance school UKDDF in Tunstall.

Likewise, according to the British Phonographic Industry (BPI), he has been certified for 19.8 million albums and 7.2 million singles in the UK as a solo artist. Similarly, he is also one of the best-selling music artists of all time, having sold 75 million records worldwide. He also topped the 2000–2010 UK airplay chart, racking up almost 50% more plays than the Sugababes at number 2.

In the year 2014, he was awarded the freedom of his hometown of Stoke-on-Trent, as well as having a tourist trail created and streets named in his honor. Furthermore, following the completion of The Heavy Entertainment Show Stadium Tourin late 2018, he has temporarily retired from world touring to ensure he is present for his three children.

Likewise, he has been nominated for many awards like MTV Video Music Awards and Grammy Awards.

The estimated net worth of Robbie is around $300 Million. Similarly, he and his wife Ayda Field moved into their £17 million Kensington mansion that used to belong to film director Michael Winner.

Likewise, he also bagged a cool £1.6million for singing at the wedding of the daughter of oil magnate Rashid Sardarov.

Talking about Robbie Williams’s body measurements, he has a height of 6 feet and weighs around 90 kg. He has dark brown hair and green eyes.