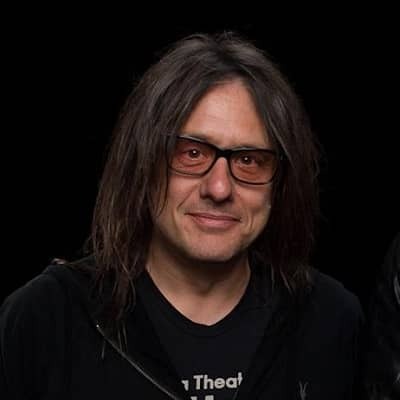 For years we've been playing and writing songs that sound happy. And yet if you listen, the words are all like "My brains are falling out of my ears

would someone please pull me together?"

I'm trying to picture some little girl whose favorite bands are like Goo Goo Dolls and Savage Garden or 'N Sync going 'Aww, that Johnny is so cute. I am going to buy all his early records,' and putting it on and then screaming and running to her parents.

My songs are in millions and millions of households, whether they're the songs on the radio or not. To me, that's a brilliant victory.

I support anything that causes mass hysteria in children. on Pokémon

Robby is married to Miyoko Takac. The couple married in the year 2001.

There are not many details regarding his marriage. They also have a daughter Hana Takac who is now 8 yrs old.

Who is Robby Takac?

Robby Takac is an American musician and vocalist. He is popular for being the bassist and co-vocalist of the rock band Goo Goo Dolls.

The band has his other members Mike Malinin, John Rzeznik, and George Tutuska.

His father’s name is Robert Carl Takac and likely, his mother’s name is Kathleen C. (Dietzel) Takac. He has a younger sister, Trish Takac.

Robby has an interest in music since his childhood. He gets his first instrument ukulele when he was 2 yrs old.

Robby completed his schooling at West Seneca East Senior High School in 1982.  Then he has his degree in Communication with an emphasis on Radio Broadcasting from Medaille College.

In 1982, Robby get his first electric guitar. During his college years, he used to played in several bands and also interned at a local radio station reading advertisements for a local toilet manufacturer.

His career professionally starred when he joined the rock band Beaumonts and then Monarch, in 1985. He met guitarist John Rzeznik and drummer, George Tutuska.  They launched their band “Sex Maggots”, and appoint Takac as the lead singer and bassist. The band name was changed into “Goo Goo Dolls” in 1986.

Their first commercial success was with the single “Name”. Goo Goo Dolls have then released various music and also toured continuously since. In 2009, they opened the studio to the public as GCR Audio.

In 2003, Takac along with Brian Schulmeister from the dance music collective Amungus. Robby also created his own record label, Good Charamel Records, in Buffalo, New York.

Takac founded a not-for-profit organization, Music is Art Festival in the year 2004.  The organization explores and reshapes music’s cultural, social, and educational impact on the community.

The musician has amassed a net worth of around $12 million.

A musician in the United States receives the paying of around $27.58 per hour. And so Robby also must have a good earning from his music career.

Robby has maintained a distance from appearing in any kind of controversial news in the media. Similarly, the musician has also not faced any such rumors yet.

Robby stands with a height of 5 feet and 5 inches ( (1.65 m). Talking about his appearances, he has dark brown colored hair and eyes.

You may also read the bio of Adrienne Frantz, Isom Innis, Mark Pontius, and Will Chase.