Famously known for his role as young Eddard Stark in the sixth season of the HBO series 'Game of Thrones.' 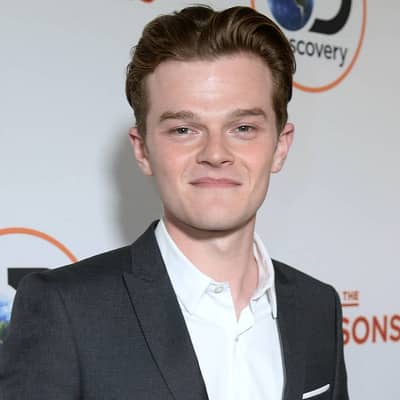 Robert Aramayo is not dating anyone at the moment and seems single. It might be that he has a secret girlfriend but is keeping it away from the media.

He seems to be a private person and prefers to keep his personal life a secret. Or it might be that he is not interested in building a relationship yet and is more focused on his career at the moment.

Who is Robert Aramayo?

Robert Aramayo is a British actor. He is famously known for his role as young Eddard Stark in the sixth season of the HBO series ‘Game of Thrones.’

In the year 2021, he was cast in the Netflix psychological thriller mini-series, Behind Her Eyes. He has been selected to play the lead role in the upcoming TV series ‘Lord Of The Rings’ on Amazon in 2021.

Robert Michael Aramayo was born on 6 November 1992 and was raised in Kingston upon Hull, United Kingdom. Therefore, he holds a British nationality and belongs to Spanish ethnicity. Currently, he is 28 years old and falls under the horoscope of Scorpio.

Robert is the son of Mike Aramayo, a managing director, and his wife Joanne. Mike was a keen sportsman and has completed the Great North Run and numerous 10k races.

He has two siblings: Laura Aramayo, the eldest, and Charleigh Aramayo, the youngest Robert is the middle child.

Laura Aramayois 27 years old, has also made her acting debut at the Hull Truck Youth Theatre and joined acting classes at the Oxford School of Drama in Oxford.

Talking about his educational background, he graduated from Hull’s Wyke College and gained a spot at Juilliard School in New York City in 2011. He made his acting debut playing the main role of Alex in a Juilliard production of Anthony Burgess’s ‘A Clockwork Orange’.

Aramayo began acting at the age of seven when he played the character, Bugsy Malone, in a primary school production. His acting skill in the Juilliard production of Anthony Burgess’s ‘A Clockwork Orange’ got him his first role in the Italian-American production ‘Lost in Florence’.

Aramayo is popular for the role of young Eddard Stark in the HBO series ‘Game of Thrones.’ He appeared in the sixth season, in the year 2016-2017.

He also acted in the role of a mechanical engineer and Harley Davidson co-founder William S. Harley in the Discovery Channel mini-series Harley and the Davidsons, launched on September 5-7, 2016.

The same year, he performed in the Tom Ford film ‘Nocturnal Animals.’ Also, he has a role in the HBO mini-series Lewis and Clark.

He has appeared in many other films including The Empty Man, directed by David Prior, The Incident at Sparrow Creek Lumber directed by Henry Dunham, and Eternal Beauty, directed by Craig Roberts.

Robert Aramayo has yet to receive any awards and nominations. It won’t take long for people to recognize his talent as he is a very skilled actor.

However, the TV series “Game of Thrones”, in which he played a role, has won 269 awards and has been nominated for different awards 738 times. It was also nominated in Grammy Awards twice in the category of “Best Score Soundtrack for Visual Media”.

Robert Aramayo has a net worth estimation of around $2 million as of 2021. His main source of income is his acting career. However, his salary and assets are still under review as of now. His acting career helps him earn a decent amount of money.

Even though he is a famous actor, he has not once been involved in any scandalous news and rumors. Robert being a well-known actor is a very careful human and tries his best to stay away from any rumors.

As his fame is rising, his haters might spread false accusations about him but he doesn’t seem like a person to mind them.

Robert stands tall at the height of 72 inches (6 feet) and weighs around 65 kg. He has a slim and fit body type and has a healthy diet. The body measurements of his chest-waist-hips are 38-32-40 inches respectively. He consists of a pair of beautiful brown eyes and short brown hair.

Aramayo is not available on social media much. However, he is active on Instagram under the username ‘@aramayo.official‘ and has gathered 1k followers. He is not active on other platforms.