Politician Robert Kennedy is married and a father of eleven. 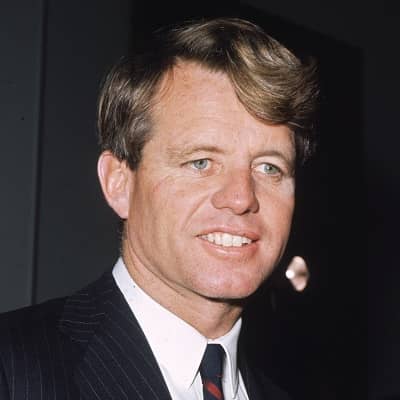 Only those who dare to fail greatly can ever achieve greatly.

The purpose of life is to contribute in some way to making things better.

Fear not the path of Truth for the lack of People walking on it.

Robert Kennedy was married to socialite Ethel Skakel. The couple married on June 17, 1950, at St. Mary’s Catholic Church in Greenwich, Connecticut. Ethel was the third daughter of businessman George and Ann Skakel.

Rory was born in December 1968, after her father’s death.

Who was Robert F Kennedy?

Robert F Kennedy was an American politician and lawyer who served as the 64th United States Attorney General and also as a U.S. Senator from New York.

In the year 1968, he was against Eugene McCarthy in the presidential election primaries.

At the California Democratic Primary at the Ambassador Hotel in Los Angeles delivering his victory speech, he was shot several times by gunman Sirhan Sirhan on June 5, 1968, and passed away the next day.

After his death, Kennedy’s body was taken to St. Patrick’s Cathedral in NYC on June 6.  The next morning a line of mourners extending 25 blocks long waited to pay their respects.

By the afternoon hundreds of thousands more people bid farewell to Kennedy as they watched his coffin pass via funeral train en route to Washington, D.C. Kennedy was buried near his brother, John, at Arlington Cemetery.

Robert was born in Brookline, Massachusetts, on November 20, 1925.

His father became a U.S. ambassador to Britain. The Kennedy family members are one of the most handsome, charismatic, and powerful families of ages. The family returned to the States in 1939 as the threat of World War II was rapidly approaching.

He is of American nationality and mixed (Irish and  Scottish) ethnicity.

Robert graduated from Milton Academy prep school and then enrolled in Harvard. After his older brother, Joseph was killed during World War II, Robert left Harvard to join the Navy.

In 1946, he went back to Harvard and graduated with a degree in government two years later. Robert spent the next three years pursuing a law degree at the University of Virginia Law School.

In 1951, the same year he graduated from law school.

After finishing law school, Robert F Kennedy joined the U.S. Department of Justice’s Criminal Division in the year 1951. In 1952 he resigned from the position to lead his older brother John’s senatorial campaign.

A year later, Kennedy was an advisor to the Senate Subcommittee on Investigations. But he left that position just six months later.

Taking about his civil rights career, he joined the Senate’s Permanent Subcommittee on Investigations as chief counsel for the Democratic minority in 1954. Kennedy, there have various approaches to helping minorities achieve their equal rights in a speech to South African students.

In 1957 Kennedy was appointed chief counsel to Senate Select Committee on Improper Activities in the Labor or Management Field. Kennedy also uncovered the corruption of Teamsters union leader Jimmy Hoffa.

In 1960 Kennedy managed brother John’s presidential campaign. When JFK was elected, Robert was made U.S. attorney general and became one of JFK’s closest cabinet advisors.

When JFK was assassinated in 1963, Robert resigned as attorney general the following September and announced his intent to run for a senate seat.

Kennedy ran successfully for senator of New York, and during his time in office, he continued to advocate for the poor and human rights and oppose racial discrimination and the escalation of involvement in the Vietnam War. He also set his sights on becoming a U.S. presidential candidate.

Being a part of America’s royalty, The Kennedy family has always been rich. So Robert also had a good earning and had a net worth of $50 million.

Kennedy owned a home at the well-known Kennedy compound on Cape Cod, in Hyannis Port, Massachusetts; however, he spent most of his time at his estate in McLean, Virginia, known as Hickory Hill (located west of Washington, D.C.).

His widow, Ethel, and their children continued to live at Hickory Hill after his death. Ethel Kennedy sold Hickory Hill for $8.25 million in 2009.

Robert had an athlete-type body standing with a height of 5 ft 10 in weighing 71 kg. He had thick eyebrows with blue-colored eyes and light brown colored hair.

Also, get to know about Beabadoobee, Melody McCloskey, Dylan Summerall, and Tom Pelphrey.