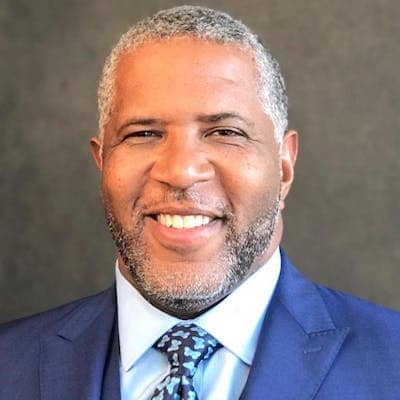 Robert F. Smith is currently a married man. He married twice and has seven children from his relationships.

His first wife was Suzanne McFayden in the year 1988. Together, they have blessed with three children but their names are Zoe Smith, Eliana Smith, and Max Smith.

This marriage was called off after 16 years in 2014. Then Robert exchanged vows with a former Playboy playmate and healthy living advocate Hope Dworaczyk on 25 July 2015.

Who is Robert F. Smith?

Robert F. Smith is an American businessman and investor. He founded and currently is the chairperson of an investment firm, Vista Equity Partners.

Moreover, Robert is also a philanthropist, chemical engineer, and investor. He is also associated with Fund II Foundation which mostly funds social organizations.

He was born as Robert Frederick Smith on 01 Dec 1962 in Colorado, the United States. The name of his father and his mother were Dr. William Robert Smith and Dr. Sylvia Myrna Smith respectively.

Robert’s ancestry is All-American and about his academics, he passed out from Carson Elementary School and East High School.

Then he enrolled at Cornell University and passed out with a chemical engineering degree in 1985. He also went to Columbia University and studied MBA in finance and marketing.

Robert F. Smith after his studies and internship joined Goodyear Tire and Rubber Company and Air Products & Chemicals as a chemical engineer. He then worked at Kraft General Foods in the same post.

After leaving Kraft, he was appointed a Co-Head of Enterprise Systems and Storage in Goldman Sachs. He was appointed in 1994 and served there for six years.

Robert in the year 2000, founded Vista Equity Partners in Texas, the USA along with Brian Sheth (Co-founder). He is now the CEO & Chairman of the Board of the company and deals in financing and other for startup businesses. Vista was Dealmaker of the Year of 2019.

At present, this author has accumulated a massive net worth of around $7.05 billion. Also, his salary from his career is not yet disclosed.

He and his wife own property in Los Angeles, Florida, and New York City. Moreover, they sold their Malibu house for $24.5 million and bought another home in the same place at $19.5M. Their other owned properties are,

Robert was once charged with a tax evasion case for four years. he paid an amount of around $140 million to get cleared.

Regarding Robert F. Smith’s body features, his height is 5 ft 10 inches and his body weight is 75 kg. He has dark brown eyes and grey hair.

Robert is officially active on social networking sites. His Facebook and Twitter accounts are followed by more than 28k and 40k followers respectively.

Also, his Instagram is followed by more than 188k people.