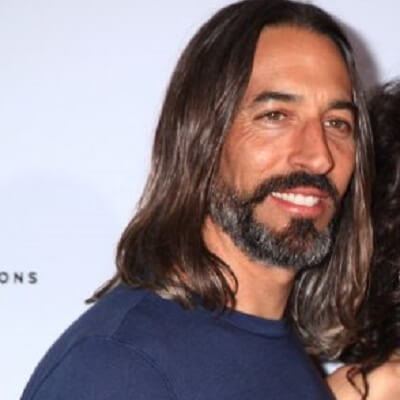 Robert Russell is a married man. He is married to Lisa Edelstein. His wife, Lisa Edelstein is an American actress. Edelstein is best known for her portrayal of Dr. Lisa Cuddy on the medical TV drama series, ‘House’. From 2014 to 2018, she starred as Abby McCarthy in the Bravo TV series, ‘Girlfriends’ Guide to Divorce’.

The couple exchanged wedding vows on May 25, 2014 in Los Angeles. He has two sons from his previous relationship. His wife Lisa is a great stepmom and loves the two kids like her own.

Who is Robert Russell?

Robert Russell is an American artist. He is known for his representational paintings that explore concepts of memory, identity, desire, and authenticity. Moreover, he gained significant attention from the media as the husband of Lisa Edelstein.

Talking about his educational background, he went to the California Institute of Arts (CalArts). From there, he received his MFA in 2006. He earned a Bachelor of Fine Arts degree from the Rhode Island School of Design.

Robert Russell is one of the well-known and recognizable artists of America in recent years. He frequently uses subdued color palette and makes representational paintings exploring concepts of identity, desire, memory, and authenticity. His paintings are often self-referential in nature and raise existential questions regarding the role of an image in addition to the process of memory and imagination. Mostly, his themes include art books, pigs, children, clouds, among others.

With his most recent paintings of clouds, he holds on to his past and expands on it. His previous two exhibitions, ‘Book Paintings and Revisits’ mainly explored the visual tropes of the artist monograph and gave continuity to his interest in authenticity, authority, and iconography. His most recent solo exhibitions include The Cabin LA, Anat Ebgi Gallery, François Ghebaly Gallery Los Angeles, Osmos New York, and Burrard Arts Foundation in Vancouver, Canada.

Russel has also been included in a number of group shows in L.A. such as Roberts and Tilton Gallery, M+B Gallery, and Material Press MOCA LA.

His wife, Lisa Edelstein is an American actress. Edelstein is best known for her portrayal of Dr. Lisa Cuddy on the medical TV drama series, ‘House’. From 2014 to 2018, she starred as Abby McCarthy in the Bravo TV series, ‘Girlfriends’ Guide to Divorce’.

How much is Robert Russell worth?

Robert Russell’s net worth is under review. Similarly, there is no information about his salary. On average, an American artist earns around $54k a year. His wife, Lisa Edelstein has an estimated net worth of around $10 million.

Robert has brown hair and similarly, brown eyes. However, there is no information about his height and weight.

Robert has not been involved in any controversies. He has kept himself away from any type of controversy and scandal. So far, he has not done anything controversial in his career. Similarly, there are no rumors about him of any kind.

Russell is not active on social media sites. He is very private.

You may also like to read the Bio, Body Measurements, Net Worth, Social Media, Career, Relationships, and more about Lisa Edelstein, Cheryl Hines, Rachel Harris, etc.