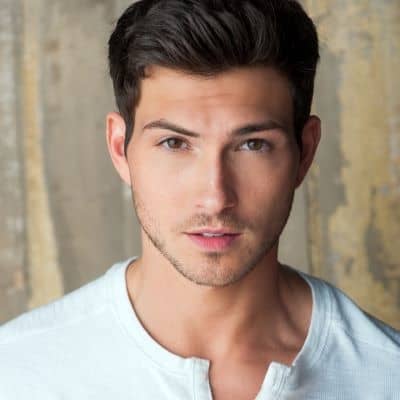 Who is Robert Scott Wilson dating?

The two got their relationships open on IG by sharing pictures of them at a beach in Los Angeles, California. The two are getting cozy on posts that date back to February 16, 2022.

Previously, He dated LA-based celebrity makeup artist Janelle Faretra. There is no sign of Robert getting married and having kids this year.

Who is Robert Scott Wilson?

Robert Scott Wilson is an American actor who rose to prominence for playing Ben Weston on Days of Our Lives. In 2021, he also featured in its spin-off mini-series Days of Our Lives: Beyond Salem.

Robert as a model had signed with Ford Models, Otto Models, and LA Model Management. Also, he is a renowned personality who participated in the US game show The Price Is Right as the first male model.

Robert was born on November 9, 1987, in Grafton, Massachusetts, the U.S. under the zodiac Scorpio. The 34-year-old actor has Caucasian ethnicity and American citizenship.

The identity of Robert’s parents, father, mother, and siblings is missing. However, he was raised by his parents outside of Boston, Massachusetts

Regarding education, he is a 2006 graduate of Grafton Memorial High School. Upon completion of high school education, he moved to New York and might have attended University.

Robert has started his career as an actor by portraying the role of Jeff in the 2009 movie Bride Wars. He then moved to Los Angeles and guest appeared as Colin Kirk in the 2011 TV series Supah Ninjas.

From 2012 to 2014, he appeared in the game show The Price is Right and emerged as one of three finalists after competing with 25 other candidates.

He won the model search in September 2012 and returned with Male Model Search II in the fall of 2014.

Further, his most noticeable role as Ben Weston in Days of Our Lives in 2014 earned him much fame. It is the longest-running television series which by now has over 14000 episodes.

The estimated salary of actor Robert is $1 million. He earned a handsome salary as a cast of Days of Our Lives, and his new project and salary are under review.

Nonetheless, Robert has kept himself away from unnecessary rumors and controversies as he does not mix his personal and professional lives.

The wiki of his chest-waist-hip measurement, dress, and other statistics are unavailable.

Robert is available on Instagram with the username @robertscottwilson with 733 posts and 117k followers.

His latest Instagram post is about cold, where is wearing a grey hoodie and written something significant to character portrayal. The post has around 5k likes within a week of upload.

Isabel Durant
Tags : American Actor Days of Our Lives The Price Is Right