Updated On November 22, 2022 | Published By: Gracie Hale
Share this
Married 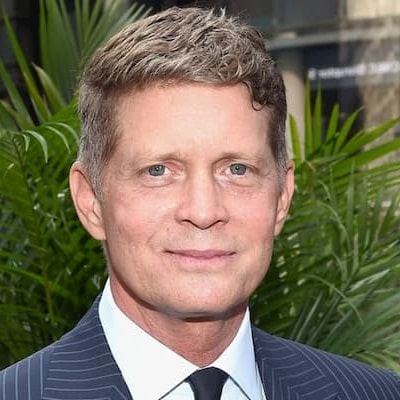 What is the relationship of Robert Simonds?

Robert Simonds’s relationship status is married and the father of five children. He is married to Annie Biondi on the 18th of September in 1999. Annie is a writer and producer of Santa.

Together the couple has five children four daughters and a son whose details information hasn’t yet been disclosed by their parents. Currently, Simonds resides in Los Angeles with his wife and children.

Previously, Simonds had dated actress Jennifer Beals during their college days at Yale. Presently, his ex-girlfriend has married Ken Dixon who is an Entrepreneur.

Who is Robert Simonds?

Robert Simonds is an American renowned film producer and entrepreneur.

He is the Chairman and CEO of STX Entertainment, a media company that creates, produces, distributes, finances, and markets film, television, and digital media, which includes live events and virtual reality.

What are the birth facts of Robert Simonds?

Robert was born in the year 1964 but he hasn’t yet disclosed his exact date of birth. He hails from Phoenix, Arizona, U.S.

He holds American citizenship and is of Caucasian descent. His full name is Robert Bruce Simonds Jr.

Robert is the son of Robert Bruce Simonds Sr., who is a businessman. However, his mother’s identity hasn’t yet been disclosed. Also, there is no information available regarding his siblings.

Talking about his academics, he graduated from Yale University.

Robert began his career as a film producer from 1990 to 2012, Robert had produced over 30 Hollywood studio films including the Adam Sandler films Billy Madison, Big Daddy, The Wedding Singer, The Pink Panther, and so on.

Similarly, he has produced some highly profitable cult films including Joe Dirt and Halif Baked.

In 2014, Robert formed a company named STX Entertainment along with Bill McGlashan and a partnership with the Chinese private equity firm, Hony Capital.

At present, he is the chairman and CEO of STX whereas the company’s other executive members are Thomas B. McGrath, Noah Gogelson, Adam Fogelson, Oren Aviv, and Patricia Rockenwagner.

STXfilms projects have included films like I Feel Pretty, Bad Moms, Molly’s Game, The Edge of Seventeen, The Foreigner, and so on.

Likewise, STXtelevision’s first project was the 13-episode series of State of Affairs which was later sold to NBC.

In April 2016, STXinternational opened Headquartered in London and John Friedberg was the current president of the division.

In early 2018, STX Entertainment President Sophie Watts accused her boss, CEO Robert Simonds of the harassment. After complaining of harassment she resigned officially in January 2018.

What is the net worth of Robert Simonds?

As of 2021, Robert has an estimated net worth in the range of $1 million to $5 million throughout his profession as a film producer.

He is an independent film producer whose over 30 films have earned more than $6 billion each in worldwide box office revenue.

Talking about STX Entertainment, the company gathered more than tripled the company’s valuation to an estimated $3.5 billion in its first four years.

So, he has granted an amassed amount of wealth through his company too.

Lately, Robert marked the rate around $8.495 million for the Mulholland house, near the Hills Post office area for sale.

The house accommodates seven bedrooms and 10 bathrooms in 7,500 square feet which he bought for $4.7 million in 2010.

Robert has a brown hair color with attractive blue pair of eyes. Further, his body measurement including his height, weight, and others hasn’t yet been disclosed.