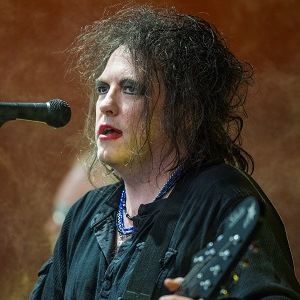 What we do I think attracts a certain type of person. I don't think age has much to do with it, you either get into it or you don't. You could be 16 or 60 and you're either gonna like us or not depending on your sensibilities

There have been very few virtuosos in the history of the group, but there have been a lot of really nice people. The Cure backstage is a notoriously fun-filled zone.

Robert Smith is a married man. He married Mary Poole in 1988, whom he met at St.

Wilfrid’s when he was 14. He has dedicated his song, ‘Love Song,’ to Mary as his wedding gift. They have mutually agreed not to have children.

Who is Robert Smith?

Robert Smith is an English singer, songwriter, and musician. He is also well known as the lead singer, guitarist, multi-instrumentalist, lyricist, principal songwriter, and only consistent member of the rock band the Cure, which he co-founded in 1976.

His family keeps shifting from one place to another, hence he was brought up in different places. He belongs to British nationality and mixed (English- Irish) ethnicity. His birth sign is Taurus.

He completed his school education by 1977.

On talking about his profession, Robert Smith’s career started at the age of 14 with the high school band ‘The Crawley Goat Band’ that also included his brother, Richard, sister Janet, and some of his friends as its members.

Whereas, he also formed the band ‘Easy Cure’ in 1976 along with Laurence Tolhurst, Pearl Thompson, and Michael Dempsey with Smith performing the role of one of the songwriters and singers. In 1978, the band was renamed ‘The Cure’ with the dismissal of Pearl Thompson from the group.

Similarly, from 1978 to 1979, the band released the singles ‘Killing an Arab’ and ‘10:15 Saturday Night’. In fact, they also released their debut album ‘Three Imaginary Boys. Likewise, he also went on a UK tour along with Steve Severin of ‘Siouxsie and the Banshees’, in 1979, for promoting their second album, ‘Join Hands’.

During 1980, Michael Dempsey left the band, and Simon Gallup, a bass guitarist, and Matthieu Hartly, a keyboardist joined the group.

From July 1982 to February 1985, he had to shoulder the entire recording process of ‘The Cure’. Likewise, he also released the solo album ‘The Top’ in 1984, where Smith played all the instruments by himself except the drums.

He won the Brit Award for British Video in 1990. During 2004, he was presented with the Godlike Genius Award by Tim Burton at the Shockwaves NME Awards for his guest appearance in the film ‘Mighty Boosh’.

During 2005, he won the ‘Ivor Novello Award for International Achievement’ in recognition of his songwriting and composition skills.

There is no information regarding his income, salary. Whereas, his net worth was around $ 25 million.

On talking about his rumors and controversies, there was a rumor that he is going to be a father.

Additionally, this has caused multiple stories about the alleged pregnancy to make their way through bulletin boards and other social media sites

On talking about his body measurements, Robert Smith has a height of 5 feet 10 inches. Additionally, he weighs is 80Kg. His hair color is black and his eye color is green.

Also, read the affair, salary, the net worth, controversy, and the bio of David Bowie, Nathan Sykes, and John Taylor.