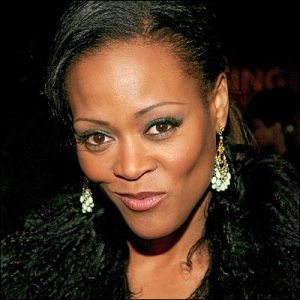 I want someone who can handle me. And I'm not the easiest person to handle

I was hit for the first time before I was married

I'm one of the nicest, most fair people I know.

Talking about her personal life, she is currently single with no rumors of associating her affairs and relationship. Her latest relationship was with Hosea Chanchez dating back to 2008 till they broke up in 2009.

Moreover, she was married twice in her lifetime. Her first marriage was with Mike Tyson dating back to February 1988. Secondly, she married tennis instructor Svetozar Marinković in 1997.

Unfortunately, both of her marriage and most of the relationship didn’t last more than a year. She has two children: Michael and William, out of which Michael was adopted by her in 1993. Seeing her past relationship, it seems that she has always been in a troubled relationship which led her to remain single currently.

Who is Robin Givens?

Beautiful Robin Givens is a stage, television, film actress and model who hails from America. She gained a lot of popularity and attention for her appearance as Darlene Merriman on the sitcom Head of the Class and as Mayor Sierra McCoy on Riverdale.

Robin Givens was born as a daughter of Ruth Roper (née Newby) and Reuben Givens on November 27, 1964. She grew up in the place she was born i.e. New York City, New York, U.S. Her ethnicity is African-American and nationality is American.

Unfortunately, her parents divorced when she was a just two-year-old baby. Her father left them and she was raised by a single mother with her sister Stephanie. She never met or saw her father after that. Her mother would encourage her and her sister to be creative and artistic.

However, not much is there regarding her earlier days and childhood. Much of the attention and fame she earned over the years is entirely focused on her work and talent. Neither her fan has asked her about her earlier days, nor she has said anything about it. Despite that, it will not be wrong to say that she had a decent upbringing which has played a significant role in her success.

She completed her early schooling from New Rochelle Academy. After that, she enrolled at Sarah Lawrence College and graduated in 1984.

Robin Givens initiated her career landing roles in popular TV show such as The Cosby Show and Different Strokes both in 1985. After the brilliant display of her talents and skills, she landed her big break as a role of rich Darlene Merriman on the sitcom Head of the Class. She appeared regularly for five seasons from 1986 to 1991.

Later on, she appeared in April in a movie Foreign Student in 1994 and as Kaye Ferrar in a movie Dangerous Intentions in 1995. Moreover, she appeared in lots of TV shows such as Angel Street, The Penthouse, Courthouse, Cosby, DAG, The Expendables, Nikita, Chuck, House of Payne, Twisted, 90210, Retired at 35 and Read Between the Lines.

In addition, returned to acting after her long break appearing in Tyler Perry’s The Family That Preys and  House of Payne and Chuck. Likewise, she appeared in Broadway The Vagina Monologues. Her latest work is her appearance romance horror film Fear Files in 2015 and as Mayor Sierra McCoy on Riverdale in 2017.

The exceptional personality she carries amassed her a lot of fame and popularity. In the same way, over the years, she has generated a lot of income from appearing in the show which surely has skyrocketed her net worth. Thus, her net worth is $2 Million as of now.

During her entire career, she was always on constant limelight and attention as a popular celebrity. As a result, Forbes magazine confirmed in May 2009 that she has not paid the tax of $292,000 including interest and penalties.

Moreover, she caused a lot of rift and controversy as she hit an 89-year-old pedestrian, Maria Antonia Alcover with her SUV critically injuring her. However, the charges were dismissed which caused a lot of heat and debate which gave rise to a civil lawsuit against her.

Robin Givens looks absolutely stunning and gorgeous with her well-maintained body. She has a body structure with decent height 5 Feet 5 Inches (1.7m) and weight of 55kg matching her body. Precisely, her exact body figure is 34-22-33 inches and bra size is 32B. Her hair color is black and eye color is also black.