Robin is a married man. He is happily married to Donya Lehner.

However, their marriage details are not available. 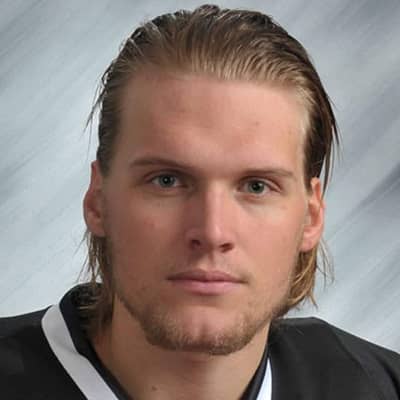 Who is Robin Lehner?

Robin Lehner is a Swedish professional ice hockey player. He is now playing from the Vegas Golden Knights team.

The player was born on 24 July 1991 in Gothenburg, Sweden. He is of Swedish nationality and belongs to Germanic and Swedish ethnic backgrounds.

He has a sister named Maja Lehner. Robin started playing hockey at the age of 10. Additionally, he also used to play soccer when he was a kid.

Robin studied at Sault Ste. Marie College in Ontario, Canada. He studied until his 9th grade but later quit his high school studies.

As she says he was bored in the study as he was also pursuing his career toward hockey.

Robin started playing hockey with Mölndal IF has also become the top Swedish goaltender of his age group. Lehner signed a three-year, entry-level contract with the Ottawa Senators on 29 March 2010.

He made his NHL debut on 16 October 2010  playing four minutes in the third period of a game against the Montreal Canadiens. He breaks the record being the youngest Swedish goaltender to feature in the game against Jhonas Enroth.

Then after on 31 July 2014, Robin signed a three-year, $6.675 million contract extension with Ottawa. Likewise, he played for the team Buffalo Sabres for around three years. He was traded on 26 June 2015.

The Sabres however announced they would not tender Lehner a contract offer on 22 June 2018. They had allowed him to become an unrestricted free agent until his contract expired on 1 July.

After that, the player was signed as a free agent to a one-year, $1.5 million contract with the New York Islanders on 3 July 2018.

The next year July he signed a one-year, $5 million contract with the Chicago Blackhawks of the National Hockey League (NHL) as a goaltender.

Robin has also been part of various international games like the 2009 IIHF World U18 Championships and the 2011 World Junior Ice Hockey Championships.

Talking about his contract with Chicago Blackhawks, he was signed with the deal of $5,000,000 including $5,000,000 as a guaranteed amount annually.

Furthermore, he was also the 7th best-paid player of Chicago Blackhawks with an annual average salary of $10,500,000 respectively.

The player also earns money from various brand endorsements. He also has his own collection of luxurious cars including a Mercedes car which costs between $32,000 to $54,800.

The player has been diagnosed with bipolar disorder, attention deficit hyperactivity disorder (ADHD), and post-traumatic stress disorder (PTSD). Moreover, he has also struggled with alcohol and drug addiction during the 2018 off-season.

Robin stands with a height of 6 feet and 4 inches and weighs around 110 kg.  Likely, he has blonde-colored hair with beautiful blue eyes.

You may also read the bio of Sara Orlesky, Mattia Perin, Kyle Peterson, and Shaka Smart.