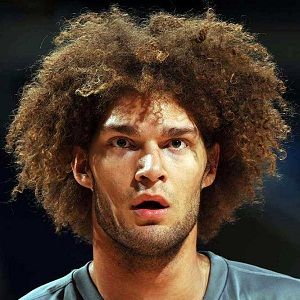 The 'Goonies' are a close knit group. They believe in themselves, even though there are doubters throwing darts at them outside...'Goonies never say die.' That's pretty in line with the mentality of our team

When you feel in love with an ex, it isn't that you still love him, but that you are simply stuck in the idea of what YOU did wrong.

Reflecting on a personal life of Robin Lopez, he is possibly single.

Who is Robin Lopez?

Tall and handsome Robin Lopez is an American well-known professional basketball player.  He is best known as the player for Chicago Bulls of National Basketball Association (NBA). He plays from center position wearing a jersey number 8.

Robin Lopez was born in North Hollywood, California. He was born on 1 April 1988. He is of Cuban ethnicity and has American nationality.

His birth named is Robin Byron Lopez. He is the son of Heriberto Lopez(father) and Deborah Ledford(mother). He was born in an athletic family, his father was a Cuban baseball player and mother was a swimmer. He has a twin brother Brook who is also a basketball player.

On 27 July 2012, he was traded to New Orleans Hornets but he was soon traded to Portland Trail Blazers on 10 July 2013. He was honored with Maurice Lucas Award in March 2014 for his efforts in his ‘Read Big’ literacy campaign with Portland Public Schools. On 16 December 2014, he was forced to miss several matches after breaking his hand. On 9 July 2015, he signed with New York Knicks where he twice recorded season-high with 26 points and 16 rebounds.

On 22 June 2016, Lopez was traded to Chicago Bulls and recorded a season-high with 25 points against a match with Washington Wizards. Since then he has been playing for team Bulls wearing a jersey number 8.

His success in career path has paid him well financially making his net worth estimated to be $26 million.

There’s an ongoing rumor that he is soon going to be traded from the Bulls.

Moving towards his body measurements, he has a good height of 7 Feet (2.13m) with body weight 116kg. He has light brown hair color and his eye color is also brown. There is no information about his shoe size.