Robin Roberts is a Good Morning America host. Robin is a lesbian and happily married to her girlfriend Amber Laign. 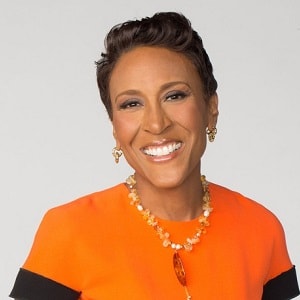 “Go on with your bad self! I want to give people hope, To know there is another day. I can be fearful or fearless. I choose to be fearless.”

Robin Roberts is a married woman.

She is married to a massage therapist Amber Laign in 2005. Her relationship is with the same sex. They have no children yet.

The couple spents their weekend at their Connecticut home and during the weekdays she lives at her New York apartment.

She officially announced her being a lesbian on Good Morning America and she posted her girlfriend’s photo in social media. She had not opened her sexual orientation before.

Who is Robin Roberts?

Robin Roberts is an American television broadcaster and guest reporter of ABC’s Good Morning America. She worked as a full-time co-anchor of the morning news program in 2005. She was awarded the 2012 Peabody Award.

She was born on November 23, 1960, in Tuskegee, Alabama. She grew up in Pass Christian, Mississippi. Her birth sign is Sagittarius.

Robert is of American citizenship and her ethnicity is African-American. She is the youngest of the four sisters.

Her father’s name is Colonel Lawrence E. Roberts, a pilot and her mother’s name is Lucimarian Roberts. Her father was also a member of the Tuskegee Airmen.

She spent her childhood practicing athletic and academic success. She also used to play basketball and tennis during her early years.

She completed her degree from Southeastern Louisiana University in 1983 where she studied with scholarship in Journalism.

She started her career in Mississippi as a sports reporter and anchored for a local TV station. She became successful and progressed to a larger city in the south.

Robert was offered to work in ESPN and she hosted the news program, Sportscenter. At the meantime, she also made an appearance as a guest reporter on ABC’s Good Morning America. After analyzing her talent, ABC hired her as a full-time co-anchor of the morning news program. She along with George Stephanopoulos helped the anchor Diane Sawyer to lead the show to the top of the competitive morning show.

Robert took rest from her career in order to treat her rare blood disorder and she suffered from breast cancer in 2007. Bone marrow was transplanted to her in September.

She made a come in her career on February 20, 2013, after the treatment i.e., after 174 days. She helped her show to collect the best rating numbers with her show.

Robin made her presence in ABC’s news coverage sporadically since then and also in 2013 Academy Awards. But, she had not recovered fully and with the consult and suggestion of doctors, she anchored Good Morning America daily once again.

Robin got an award 2012 Peabody Award for her program GMA and she was honored by the 2013 ESPYs in July 2013. Also, she was awarded Arthur Ashe Courage Award by basketball star LeBron James. Another achievement of her is 2018 Radio Television Digital News Foundation’s Lifetime Achievement Award.

She has been selected as a mentor for Disney’s ‘DreamBigPrincess’ on October 10, 2018, and she co-anchored the wedding of the American television star, Meghan Markle with Prince Harry on May 19, 2018.

It is estimated that she has a net worth of $25 million USD. Her main source of income is from her professional career.

Robin has an incredible home in Connecticut.

There were rumors about her sexuality and she came in public and announced herself as a gay officially in December 2013.