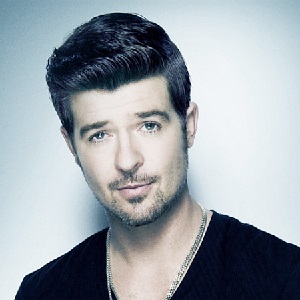 Life is full of constant ups and downs, and all I ask for is redemption in the end

Bob Dylan and John Lennon and Bruce Springsteen, these are soul guys. Bruce Springsteen might not sing like Otis Redding, but he sings with white soul. He's singing and he's writing songs from the bottom of his gut

I don't like labels, but I do have blue eyes and I'm soulful, so what am I going to do?

Robin Thicke was once a married man. He was previously married to actress Paula Patton. Thicke began dating Patton at the age of 16. After a long affair, they got married on 11 June 2005.

They together had a son named Julian Fuego Thicke, born in 2010. After being together for 21 years, they separated in February 2014. Their divorce was finalized on March 20, 2015.

However, Robin began dating model April Geary in 2014. The couple is engaged and they are living a happy life together.

They are blessed with two children. Their names are Mia Love Thicke and Lola Alain Thicke.

Who is Robin Thicke?

Robin Thicke is an American singer, songwriter, and record producer. He is best known for his album The Evolution of Robin Thicke (2006), which went platinum. He is also famous for his albums Something Else (2008) and Sex Therapy: The Session (2009).

He is the ex-husband of famous American actress Paula Patton.

Talking about his early life, Robin Thicke was born on 10 March 1977, in Los Angeles, California, USA. His birth name is Robin Charles Thicke.

He is the son of American actress-singer Gloria Loring and Canadian actor Alan Thicke. His parents divorced when he was seven years old. His father passed away in 2016.

Robin has an older brother named Brennan and a younger half-brother, Carter. Both of his brothers are actors. He became interested in music since his childhood age.

His nationality is American and belongs to mixed (English, Irish, Scottish, Norwegian, Welsh) ethnicity. His educational background is unknown.

Robin Thicke began his career as a singer and artist in his own right. Initially, he earned fame within the industry as a songwriter and producer for other artists. During his early career days, he co-wrote “Love Is on My Side” on Brandy’s eponymous debut album.

After that, he worked with Jordan Knight, Jimmy Jam, and Terry Lewis on several songs in Knight’s 1999 album Jordan Knight. Until 2005, he recorded and performed solely under his surname, Thicke.

His album sold 137,000 copies in the first week. Also, it debuted at number three on the Billboard 200 charts. In December 2011, he released his fifth studio album, Love After War. He has released seven albums till now, including Paula (2014).

He has been nominated for several awards including BET Awards, ASCAP, Grammy Awards, Juno Awards, and much more. He has a net worth of 15 million dollars but his salary is not revealed yet.

Rumors were that Robin cheated his wife with model Lana Scolaro in 2013. He became a part of a big controversy in 2014 when his controversial Instagram photos with Lana went viral, in which Robin’s hand was on Lana’s butt.

Robin faced criticisms when he copied Marvin Gaye’s song Got to Give It Up with Pharrell Williams. After that, they paid Gaye’s family $7.3 million as part of the ruling.