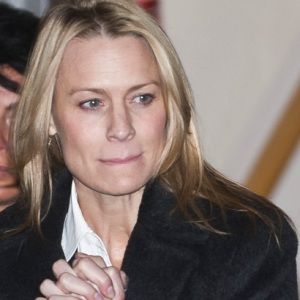 Famous is celebrityism and I don't want that. I know that I'm not that. Everybody knows who you are, I can't imagine living that life.

"I don't want to knock it. It's been great. This has been my acting class - and paid training ain't bad."

These heavy movies, you carry them with you. Some days, when it would be great to chill and be a mom and just crash, I'm so wired, I can't turn it off. I would love to do a comedy again, it would be so much fun. Do people know that? Let's tell 'em!

Robin Wright has been married and divorced twice in her life. Her first husband was actor Dane Witherspoon. The couple first met in 1984 on the set of the soap opera Santa Barbara. They got married in 1986. After two years of their marriage, they divorced in 1988. After that, she got married for the second time on 27 April 1996, with actor Sean Penn. The couple together had two children named Dylan Frances Penn and Hopper Jack Penn. Sean and Robin divorced in  August 2010. She was engaged to Ben Foster for 2 years from 2013 to 2015. Since then, she has not been in any relationships till now. She is currently single.

Who is Robin Wright?

Robin Wright is a famous American actress and director. She is famous for her role as Diana in the 2005 movie Nine Lives. She is also popular for her role as Erika Berger in the film The Girl with the Dragon Tattoo (2011). Since 2013, she portrays the character Claire Underwood on the hit political drama series House of Cards. In 2014, Time Magazine named her one of the “100 Most Influential People in the World”.

Robin was born on 8 April 1966, in Dallas, Texas, USA. Her birth name is Robin Virginia, Gayle Wright. She is the daughter of Gayle Gaston and Freddie Wright. Her mother is a cosmetics saleswoman and her father is a pharmaceutical company employee. She grew up in San Diego, California. She attended La Jolla High School. After that, she enrolled at Taft High School in Woodland Hills, Los Angeles. Her nationality is American and she is of English, Scots-Irish, French, and Irish ethnicity.

Robin began her career as a model when she was 14 years old. She made her acting debut playing Kelly Capwell on the NBC soap opera Santa Barbara at the age of 18. Her role in the series was highly loved by the fans and audience. As a result, she received several Daytime Emmy Award nominations. She gained critical acclaim for her role as Jenny Curran in Forrest Gump (1994). For her role in the film, she received Golden Globe Award and Screen Actors Guild nominations for Best Supporting Actress. Next, in 1996, she starred in the lead role of the film Moll Flanders (1996). As a result, she received a Satellite Award nomination for Best Actress in a Drama. Afterward, she appeared in several movies and TV films including Loved, She’s So Lovely, The Singing Detective, A Home at the End of the World, and much more.

In 2005, Robin played the character Diana in the film Nine Lives.  For her role in the film, she was nominated for the Gotham Independent Film Award and Satellite Award for Best Actress. In 2014, Time Magazine named her one of the “100 Most Influential People in the World”. In 2017, she appeared as General Antiope in the film Wonder Woman. Since 2013, she portrays the character Claire Underwood in House of Cards. Presently, she is filing for her movies Blade Runner 2049 and Justice League. She has a net worth of 65 million dollars.

Her long neck has been the topic of discussions on some Reddit sites and threads. There have been multiple rumors related to her dating history. Rumors of her reuniting with Sean Penn had also done the rounds in 2015.

Famous actor Charlie Wright criticised for his new role.Talks about his dating affairs and other relationship.