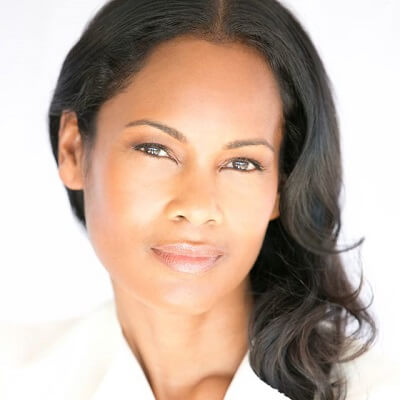 Robinne Lee is a married woman. The actress is married to Eric Hayes. Her husband is a producer by profession. The couple dated for a while before deciding to get married. They exchanged wedding vows on 14th July 2001. The couple is very close to each other and has been going strong ever since the day they got married.

Lee has stated that marrying him was the best decision of his life. Moreover, she has also referred to him as his ‘best friend’ and ‘favorite person’. On July 14, 2019, Lee posted on Instagram celebrating its 18th anniversary. The couple went to Pris for the occasion.

From their marriage, the couple has two children; a son and a daughter. However, they have not revealed their identities and birth dates.

Who is Robinne Lee?

Robinne Lee is an American actress, producer, and author. She is well-known for her work in the movies, ‘National Security’, ‘Deliver Us from Eve’, ‘Hitch’, ‘Fifty Shades Darker’, and ‘Fifty Shades Freed’.

She spent her childhood days with her family in Mount Vernon. Her ethnicity is Jamaican, African, Chinese, British.

Robinne Lee made her debut in the romantic comedy, ‘Hav Plenty’ in 1997. On TV, she made guest appearances in Numbers and Buffy the Vampire Slayer. In 2003, she made appearances in National Security and Deliver Us From Eva.

The following year, she featured in the music video of Usher’s single, Confessions Part II. In 2005, she got her breakthrough. She appeared alongside Will Smith in the blockbuster, Hitch. In 2008, she once again worked with the popular actor in the drama film, Seven Pounds.

Lee then got a lead role in ‘This is Not a Test’ in 2008. She portrayed the character, Ros Bailey in Fifty Shades Darker and Fifty Shades Freed.

An inactive member of the New York Bar, she has produced several independent movies and also speaks on panels concerning the roles of women and actors of color in the industry.

On 13th June 2017, St. Martin’s Press published her debut novel, The Idea Of You. An audiobook, narrated by herself was also released about a year later, on 3 April 2018.

Robinne Lee has an estimated net worth of around $1 million. Her annual salary is estimated to be around $450k.

Lee stands at a height of around 5 feet 4 inches. She weighs around 61 kg. Moreover, she has attractive body measurements of 35-24-35 inches for breasts, waist, and hips. She has black hair and dark-brown eyes.

The actress has not been involved in any controversies. She has not done anything controversial so far in her career. She has kept herself away from scandals and any kind of controversies. Lee is a well-respected actress with a growing fandom. Similarly, there are no rumors about her.

You may also like to read the Bio, Career, Social Media, Relationships, Net Worth, Body Measurements, and more about Julianne Phillips, Delta Burke, Raquel Leviss, and more.